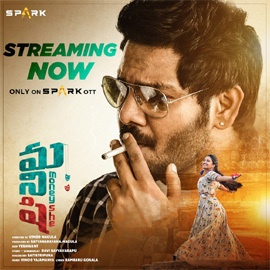 MoneyShe is the latest low budget crime thriller that had its digital premiere on the recently launched SPARK OTT platform. This kidnap thriller has actor-musician Noel, Malayalam actor Shiju and Telugu beauty Pujitha Ponnada in lead roles. Let’s find out how the film is.

Chandu (Noel) and Master (Shiju) kidnap Radio City RJ Madhumita (Pujitha Ponnada). They make a ransom call to Madhumita’s judge father and demand Rs 2 crore to free her. Why do Chandu and Master kidnap Madhumita? Is it just the money or is there a strong reason behind their kidnap plan? You need to watch the movie up know the rest of the story.

Noel as an overenthusiastic youngster plays his role decently. Pujitha Ponnada as the damsel in distress looks pretty and vulnerable. Her acting is okay, as her character doesn’t have much scope for performance. Shiju makes a comeback in Tollywood after a long time, and his performance in emotional scenes is quite good. He has also dubbed for his role.

The twists revealing the main motives behind Chandu and Master’s decision to kidnap Madhumita are interesting. Another plus point is the short run-time, which is of just about 86 minutes. The writer and director must be appreciated for sticking to the film’s main theme, without incorporating unnecessary comedy or songs.

MoneyShe fails big-time in the writing and direction aspects. While the story is wafer-thin, the screenplay is not engaging either. Except for the minor twists, there is hardly anything exciting in this botched up thriller. There are two flashbacks that act as speed brakers and test audiences’ patience. Even though the film has a short run-time, the lackluster screenplay makes it a boring watch.

MoneyShe is made on a minimal budget and it shows on the screen. The music, dialogue, cinematography, editing and production design are average at best. The half-baked screenplay and direction which don’t leave audiences on the edge of their seats are the main drawbacks of this film.

On the whole, MoneyShe is an underwhelming kidnap thriller that fails to excite throughout. Uninspiring screenplay and direction spoil the viewing experience to a great extent. Barring a couple of twists, there is not much to take away at the end of the film. If you are planning to watch MoneyShe, we suggest that you keep your expectations low.