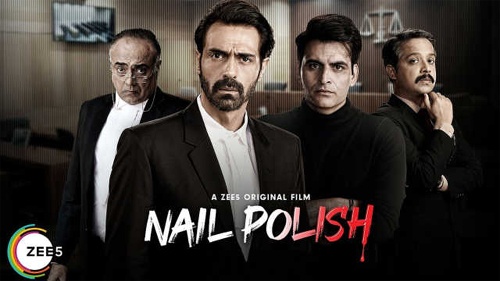 So, continuing the series of reviewing movies and shows on OTT, our today’s pick is Paurashpur, the latest high budget Hindi web series on Alt Balaji. Let’s now see how it is.

So, continuing the series of reviewing movies and shows on OTT, our today’s pick is Nail Polish, the latest Hindi film on Zee5. Let’s now see how it is.

Veer Singh(Manav Kaul) is an ex-army officer who used to work as a spy. He lives in Lucknow and works with school kids post his retirement. But one fine day, he is charged with the murder of a migrant’s kids and is put behind bars. His case is assigned to a powerful lawyer played by Arjun Rampal. On the contrary, the state ropes in Amit Kumar(Anand Tiwari). As the trails start, so many crazy twists and turns are unveiled in the story. Is Veer Singh innocent? and who is behind all this? That forms the rest of the story.

The film is based on Manav Kaul’s story and he does an amazing job in his role. He plays the victim and does a commendable job in the emotional department. The film relies mostly on his performance and Maanav does a solid job. Arjun Rampal plays a stylish lawyer with aplomb. It was good to see him in a commanding role after a long time and Rampal does amazingly well in his serious role. Anand Tiwari gets an emotional role and he was also perfect.

Rajit Kapoor as the judge brings a lot of depth to the film. More than anything, the emotions in the film click well. The courtroom scenes have been handled well and have also been shot well. A lot of research has been gone into the writing and criminal acts have a lot of seriousness and look right. The production values of the film are also good.

The second half of the film is quite predictable and we exactly know what is going to happen in the end. The narrative is also a bit old school with all the plots explained in a slow and known manner. The film is a serious drama and does not dwell much on the subplots and comes straight to the point. Some law-based points in the case should have been explained in a clear manner for the common audience to understand.

On the whole, Nail Polish is a decent thriller with neatly executed emotions. Though the second half is slow and a bit predictable, the film still has good courtroom scenes and confrontations to impress the movie lovers who like criminal courtroom dramas.