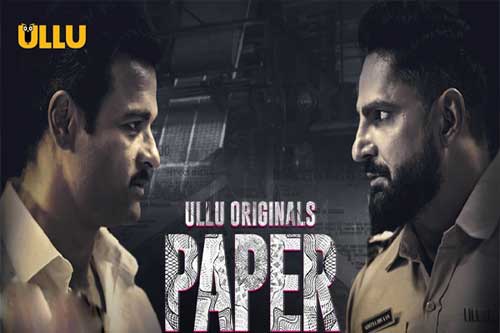 So, continuing the series of reviewing movies and shows, our today’s pick is the Hindi web series Paper. Starring Ronit Roy, the series is available on Ullu. Let’s see how it is.

Abdul(Ronit Roy) is a coconut seller who has big dreams. He wants to make it big and stars doing petty crimes. But one fine day, he understands that there is so much money in the fake paper stamp business and starts it. Within a short period of time, he becomes quite rich. But a silly mistake of his gives a hint to the cops and they get after him. The rest of the story is as to how Abdul takes things to another level and also handles the cops.

Ronit Roy is the only solace of this show as it is his sincere performance that holds the attention of the audience. Be it is stylish dialogue delivery or the massy screen presence, Ronit Roy does an amazing job. All the heroic scenes where he mouths over the top dialogues to the cops and villains have been showcased so well.

The camera work in the series is good and showcases the bygone era nicely. But editing is pathetic as shots have been abruptly and irritate the audience. The way fake passport scam is showcased looks good and the added BGM also helps matter much. Kate Sharma was good in the given role. The show also showcases how the cops operate such big scams with limited scope.

One of the biggest drawbacks of the show is its writing. There is no depth in the writing as things do not create much impact. Handling a fake stamp paper business looks good on paper but execution wise, things are not that easy. After creating so much hype, the ending is finished in a haphazard manner.

Except for the hero’s role, the emotions of the other supporting cast look fake. Once the twists in the case are unraveled by the cops, the narration becomes bland and predictable till the end. The production values of the show are also dull and do not create enough effect making scenes look over the top.

On the whole, Paper is a crime drama that has an interesting setup and story. But its dull narration, poor production values, and lack of proper supporting cast make things boring for the audience. Except for Ronit Roy’s sincere act, this series does not impress much with its storytelling.