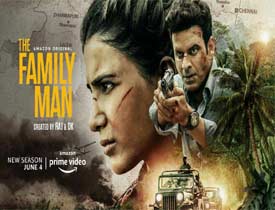 The wait is finally over as the much-awaited second season of The Family Man is finally out on Amazon Prime. Let’s see whether it lives up to the hype or not.

The story starts with the Sri Lankan government asking Indian PM to help them nab the LTTE chief Bhaskaran(Mime Gopi). On the other hand, Srikanth Tiwawi(Manoj Bajpai) quits his undercover job and joins an IT firm. This is also the time when Sri Lankan PM is on a trip to India and seizing this as an opportunity, Bhaskaran(who is hiding in the UK) plans a meticulous attack. He brings in Raji(Samantha) a well-trained LTTE soldier to kill the PM through a suicide mission. Left with no choice, Srikanth is brought back and is sent on a special mission to nab Raji.

Firstly, the second season lives up to all the hype that was created. Be it, Samantha, Manoj Bajpai, thrills and action, everything is on point and thoroughly entertains you. The show directors, Raj and DK narrate the show in such a manner that excitement levels build with each passing episode until the climax.

Manoj Bajpai was the heart of the first season and he continues to impress. This time, his is even more lethal as the mission gets personal as well. Manoj is a terrific actor and showcases his emotions and tense attitude in a superb manner. Sharib Hashmi, who plays Manoj’s assistant is also quite good and plays the supporting act well. Priyamani does not have much to do but is effective.

Last but not the least, Samantha makes a terrific OTT debut and is mind-blowing as Raji. She shocks us with her intense avatar and the manner in which she hides her pain and suffering looks superb. Be it her looks, body language, or stunts, Samantha is on another level here. Watch out for her scenes where she kills her boss and does those action sequences, she was amazing and you will never get to see her in such an avatar again.

The production values and details that have gone into the making are amazing. The supporting actors chosen and the investigative scenes narrated are just too good. The show is not only about action but the drama is quite gripping as well.

There not many drawbacks but for all Samantha fans, she makes an entry only in the third episode. The family drama of Priyamani and Manoj Bajpai was amazing in the first season but here, this angle is not given much importance.

Also, the show becomes a bit predictable in the last but one episode as the search for Raji gets dragged a bit. Also, this show might not go well with some Tamil audience as the LTTE and its backdrop is shown in a negative manner in some places.

The camera work of the show is amazing and the best part the police station fight which is riveting. The camerawork showcased and the manner in which the fights are choreographed look so real and gives you goosebumps. The BGM is solid and elevates a lot of scenes. The makeup done for Samantha needs a special mention. The production design, gadgets used, and set work are amazing.

Coming to the director Raj and DK, they have done a terrific job with the second season. Their writing is so strong that the series is filled with gripping action and drama. The way they extract performances from Samantha and Manoj Bajpai was also very good. The best part is that the series has logic and is on par with any international show with the backdrop of terrorism. More than anything, they make the series quite entertaining.

On the whole, The Family Man 2 lives up to all the hype and hysteria created. Filled with gripping action, drama, and solid emotions, this is surely one of the best shows on OTT so far. A bit slow to take off but Samantha’s mind-blowing act and nail-biting sequences make this series a must-watch. Don’t miss it.