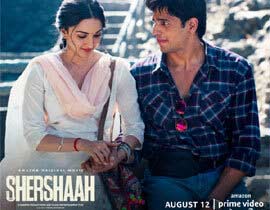 Continuing the trend of reviewing shows and movies on OTT, today’s pick is Shershah starring Siddharth Malhotra. The film is out on Amazon Prime and let’s see how it is.

Vikram Batra(Siddharth Malhotra) is from a small town in Himachal Pradesh. Right from his childhood days, his only dream is to become an army officer. When he becomes one, Vikram leaves everyone behind in one of his coveted operations. Impressed by his valor, Vikram and his team gets deployed in the Kargil war. How does Vikram Batra go all out and come out victorious is the story of Shershah?

Shershah is the biopic of army officer Vikram Batra who lost his life in the Kargil war. Siddharth Malhotra is the perfect match as Vikram and does quite well in the film. This film gave Siddharth a lot of scope to showcase his emotions and the young actor makes full use of it.

Kiara Advani is so good as Siddharth’s love interest. The real-life couple does supremely well and their chemistry is quite good. The war scenes need a special mention as the action blocks and whole production design was really impressive.

The last half an hour of the film is filled with intense war drama and nicely elevates the heroism of Vikram Batra and how he saved the country. The music of the film is quite impressive as all the songs are quite emotional.

One of the biggest drawbacks of the film is the weak supporting cast. Except for Siddharth Malhotra, none of the actors make an impact. If some known actors would have been there, the film would have been even more gripping.

Also, the love story of Siddharth and Kiara is stretched for no reason. The first half an hour goes for this love story which is slow. Also, the emotions in key areas in the first half are missing. The manner in which the hero’s parents react, the whole family angle when soldiers die, this aspect is missing.

Production values of the film are top-notch. As said earlier, the production design and the war setup are just amazing. The camerawork nicely captures the mountains and showcases the film in a realistic light. Dialogues are impressive and so was the BGM by Yuvan Shankar Raja.

Coming to the director Vishnuvardhan, he makes a good impact in his debut Hindi film. The Tamil director uses his experience and narrates the film in a decent manner and ends it in a very emotional manner. He showcases the Kargil war in a detailed manner. Had he used some better actors for the supporting cast, things would have gone to the next level.

On the whole, Shershaah is a gripping war drama that has good action blocks and impressive emotions. Barring the dull supporting cast and a slow start, this biopic on Kargil hero, Vikram Batra, has engaging moments of pride and ends as a good watch this week. Go for it.