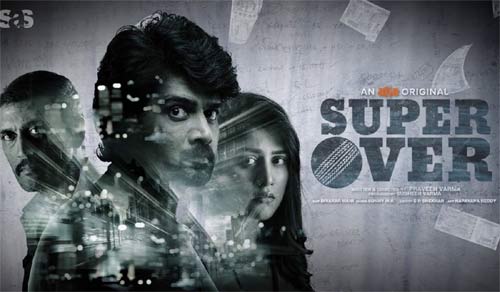 Aha’s latest film, Super Over has been creating a decent buzz among its subscribers. Being directed by Praveen Varma, the film is scheduled for a premiere on January 22nd but it was premiered last night for the media. Let’s see how it goes.

Being childhood friends, Kaasi, Vaasu, and Madhu (portrayed by Naveen Chandra, Rakendu Mouli, and Chandini Chowdary respectively) lead a happy go easy life. One fine day, upset with his financial problems, Madhu gets tilted towards cricket betting. By the end of the cricket premier league season, he wins a massive amount and his friends Vaasu and Madhu become a part of it. The real story starts here as they get into big trouble through a bookie. What kind of struggles do they face to get back their money? forms the story.

Naveen Chandra, Chandini Chowdary, and Rakendu Mouli perfectly fit in their given roles. The chemistry between the three friends looks so natural. The way all the cricket betting scenes and bookie set up has been presented in an authentic manner looks realistic.

The way the main story has been narrated in one single night is good and has enough crime and thrilling elements in it. The entire night episodes are executed with a gripping screenplay added with good twists and turns. Actor Ajay as a tough cop gave a decent performance. All the cat and mouse scenes between Ajay and friends are nice.

The chasing episode canned in the night has come out quite well and looks gripping on screen. Actor Praveen and viva Harsha are okay in their short but prominent roles.

One of the scenes between Ajay and the friends’ group looks good on screen but they are far away from reality and look a bit stretched. The film has a very thin storyline based on cricket booking and has no commercial elements like songs and fights which may not go well with a section of the viewers.

After watching the film, we instantly get a feeling that the film has been ended by not answering a few questions like how cops left the friends so easily without further investigation on the crime.

As mentioned above, the film has no songs but the background score is apt and suits the film’s mood. The suspense elements in the movie are nicely elevated with the re-recording. Editing work is fine as the film’s runtime is kept short without any unwanted scenes. Cinematography is okay as the night mood has been captured well by using appropriate frames.

Before mentioning director Praveen Varma, the sad news is that during the last leg of the film’s shooting he passed away in a major road accident. We offer our sincere condolences to talented technician Praveen Varma’s family.

Coming to his work, though Praveen Varma’s storyline is very thin, he managed to write a gripping screenplay based on the cricket booking concept. His style of execution is neat and has clarity in it. Super Over is originally bankrolled by noted director Sudheer Varma and his production values for the film are good.

On the whole, Super Over is a crime thriller that is decent with its narration part. Though the film has a few unconvincing episodes and foul language at regular intervals, considering the OTT release, the film ends up as a watchable fare for its thrills and stylized execution.

Click here to watch Super Over movie on AHA