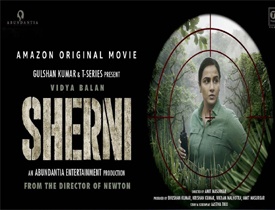 Continuing the series of reviewing films and shows, our today’s pick is Sherni starring Vidya Balan. The film is out on Prime video and let’s see how it is.

The story is set in the forest area of Bijaspur and a deputy forest officer named Vidya Vincent is posted to tame a tigress who kills the villager. This is also the time when the elections are around and a local politician promises that he will kill the tigress to save the village. This creates more problems for Vidya. What will she do now? How will she tame and save the tigress amidst huge political pressure. That forms the story of Sherni.

Vidya Balan plays a different role in this film and she is more subdued in her character. This is something new for us to see as Vidya had played more active and bold roles. She does not go loud and stays in her role through the film which is good.

Vijay Raaz was quite good in his role. He ably supports Vidya Balan. The small-town politics and how government servants face issue has been nicely showcased. Though the film starts on a slow note, once it enters into the main topic, it looks gripping.

The drama is not serious or has any thrills but unfolds in a good way engaging the audience. The satires shot at the government and the way it operates looks good. Sharath Saxena is also good in his role.

One of the biggest drawbacks is that the film is slow-paced. Seeing the title Sherni, one would go in thinking that the film would be a lot about the tigress but it is not. The pace is slow and most of the time, it gives a documentary kind of a feeling.

The second half is where things go for a toss. The scenes are routine and the drama that is needed is missed completely. Moreover, the scenes are predictable and do not entertain much. Vidya Balan’s role is also not handled well during this time and that is the reason, the film looks weak.

Sherni has solid camera work and good visuals. The theme and locations have been kept real most of the time. The production design and costumes are pretty good. But the BGM is disappointing as it does not elevate the scene at all.

Coming to the director Amit, he has done an okay job. Though he does not create many thrills, he tells his point but at a slow pace. If he would have added more masala, things would have been good.

On the whole, Sherni is a forest drama that has an interesting backdrop and a good performance by Vidya Balan. The film is based on a serious topic and takes time to grow. If you like concept-based films and do not mind the slow pace, this film can be given a shot.