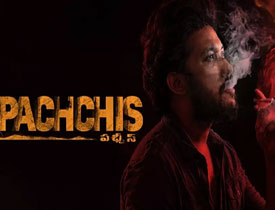 Continuing the series of reviewing low-budget films and shows, today’s pick is Pachchis, which is now out on Prime video. Let’s see how it is.

Abhiram(Raamz) is a guy who loves gambling but ends up unlucky most of the time. A situation arises where he has to owe 25 lakhs to RK(Ravi Varma) who is the casino owner. To arrange this money, Abhiram enters a local political issue between Gangadhar and Basava Raju. This is also the time, he comes across Avantika(Sweta Varma) who is in search of her lost brother and gets connected to the crime angle. How will Abhiram come out of this problem cleverly is the whole story of the film?

Raamz as the cunning young man was good. He suits the role perfectly and lives in his character well. All his scenes with Ravi Varma are quite good. Swetaa Varma, as the one who is looking for her lost brother impressive. Her emotional and tense expressions work for the film quite well and her thread looks engaging.

Ravi Varma gets a good role and is superb as RK. His dialogue delivery, Hyderabadi accent, and screen presence were quite good. Subhaleka Sudhakar is getting good in his serious role these days. The climax twist is also brought in well.

The film has a dark theme and has some tense moments of thrill which are handled well in the first half. The undercover cop angle in the film is handled well. The film’s theme is showcased so well by the cameraman as the visuals look quite gripping.

The film starts on an interesting note but after a while, the excitement level dies down. There are a number of repeated scenes and just to create an interest, the scenes are added to give the screenplay a twist.

On paper, Pachchis is great but when it comes to execution, things should have been made easy for the audience. It takes time for the audience to understand the layers of the film and each character comes through. The film has an open ending giving a hint for the sequel which looks a bit odd.

The production values of the film are top-notch as the locales, night effect, and props used are amazing. One of the biggest highlights of the film is the music and BGM by Smaran. It needs a special mention as it totally lifts the spirits of the film. The production design is good and a few scenes of crime should have been toned down to make the film crisp.

Coming to the directors’ Sai Krishna and Ram Sai, they have done a passable job. The film is good on paper and had the chance of becoming an edgy and dark thriller. But the makers drag things a bit and narrate it with a different kind of screenplay which is not that effective.

On the whole, Pachchis is a film that has a good premise and fine taking. But it gets dull with routine scenes and lacks novelty in the latter part. The film has some good performances but the screenplay is not that effective and makes it strictly an okay watch. All those who like crime thrillers can give it a shot and the rest can take it easy.