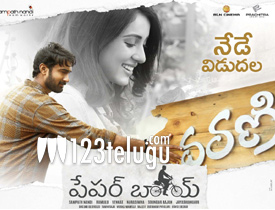 Sampath Nandi has been promoting Paper Boy on a massive level from the past few days. The film has finally hit the screens today and let’s see how the film turns out to be.

Ravi(Santosh Shoban) is a paperboy who falls in love with a rich girl called Dharani(Riya Suman). As time passes by, Dharani too gets close to Ravi and convinces her parents for her marriage. The twist in the tale arises when the rich and poor boundaries creep up between the lead pair and the love story is broken midway. Rest of the story is as to how the couple goes through all the problems and marry each other at the end.

Love stories are one and the same in most of the films but it is the treatment which makes things interesting. The first thing that hits you in paper Boy are the dialogues. The love story gets a decent boost with the amazing dialogues written by Sampath Nani. Be it the romantic dialogues or those written for the family drama, they create a good impact on the film which has a simple thread.

Hero Santosh Shoban does an impressive act as the Paper Boy and was very good in all the emotional scenes. He is quite talented and if chosen his career well, can go a long way. Heroine Riya Suman gets a meaty role in the film. Even though she takes time to settle down in her role, she is good by the end of the film. Bittiri Sathi and Vidyulekha’s comedy track looks unnecessary but has good comedy.

Tanya Hope gets a very good supporting role and does exceptionally well. The film is shown through her character and Tanya plays a key role in the climax as well. The family emotions and what the parents go through when a rich girl and poor boy decide to marry each other have been showcased well. Last but not the least, the camerawork is exceptional in the film as the love story and the simple set up have been showcased in a brilliant manner.

One of the biggest drawbacks of the film is that the story is ages old as the makers have taken a routine formula and refurbished it with good emotions in certain areas. One more part is that the film is quite slow. Things take their own time to get established in the second half.

The director fails to establish the love story well between the lead pair in the first half. Scenes are below par and one might get slight confusion whether the girl has said yes or no to the boy wholeheartedly. Some crucial scenes should have been showcased so that the love story would have been more effective.

Casting for heroine’s brothers who play crucial roles should have been done better. The comedy showcased through the hero’s friend and his love story should be edited out to make things crisp.

Credit should go to Sampath Nandi for making the film with good production values. Even though the budget is less, the film is grand and looks pleasing to the eye. The screenplay of the film gets routine after the first fifteen minutes in the second half as predictable scenes take center stage. Production design is good and so was the music of the film. Songs are a bit misplaced.

Coming to the director Jaya Shankarr, he has done an okay job with the film. As the film is filled with good emotions in the latter half, he should have made the love story even stronger in the first past. Even though he kept the proceedings predictable, he managed to evoke the right emotions in the second half which saves the film.

On the whole, Paper Boy is a routine but passable love story which has decent emotions. Storywise, there is nothing new that you will see here but the realistic family drama and engaging climax in the second half save the film. The old school story has been polished and given a good feel in certain scenes and this enables you to give this film a shot. But all you need to do is to keep your expectations in check and go with the mood and slow pace of the film.