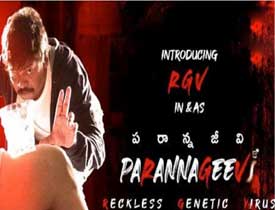 So, continuing the series of reviewing movies and shows during the lockdown period, our today’s pick is the counter-attacking film on RGV, Parannageevi. The film is available on Shreyas ET and let’s see how it is.

RGV(Shakalaka Shankar) is a director who makes false promises to upcoming heroines and exploits them physically and mentally. This behavior of RGV does not go well with his assistant Mahesh(Lakshman) who cannot do anything about it. On the other hand, producer Sekhar(Kathi Mahesh) ropes in RGV to do a film for him but RGV keeps focusing on making a biopic on Pawan Kalyan. The rest of the story is as to how Sekhar and Pawan Kalyan fans teach RGV a lesson.

Shakalaka Shankar does well as RGV. As he is known to imitate the star director, Shankar does it with ease in this film as well. The way he does comedy or spoofs RGV has been showcased well in the film. The girls, Lahari and Jasmine, who played the roles of wanna-be heroines also did well.

Kathi Mahesh is also neat as the producer and evoked good comedy here and there with his satires. The film is all about how RGV thinks in real life and how he does not care about anyone. This aspect has been showcased well in just a few scenes.

Half of the film showcases how RGV uses girls for his own purpose. The film itself is made to demean RGV and that is the reason, there are so many scenes that do not have any sense or meaning. They just highlight how RGV is with girls and what he does with them through his films.

Also, there is no flow in the story as the narration is so silly. The so-called comedy does not click one bit and irritates the audience in no time. The film is anti-RGV but the makers should have at least planned something well with a proper story. But sadly, there is nothing in this film as some silly scenes are combined and thrown at the audience for no reason.

The music of the film is okay as the songs will be loved by fans of Pawan. Production values of the film are not at all good but the visuals are decent enough Dialogues are horrible and so was the screenplay. Coming to the director Nutan Naidu, he did not know what he is making and just shot some scenes of showcasing RGV in a bad manner but in that also, the makers failed.

On the whole, Parannageevi is a film that has been made to defame RGV. But the silly narration and over the top scenes bore you to no extent. RGV is a big name and when you decide to ridicule him, your subject and scenes should be super strong but that does not happen here. In fact, the film is even horrible than RGV’s own duds in recent times and will not be liked by even Pawan Kalyan fans as well.