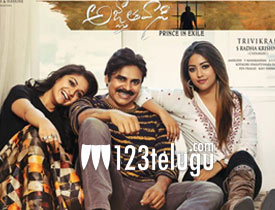 Agnyaathavaasi is probably one of the most awaited films of the recent times. After a huge round of promotions, the film has finally hit the screens and there are huge expectations from the hit combo of Pawan Kalyan an Trivikram Srinivas. Let’s see whether they live up to the expectation or not.

The film starts off with the brutal killing of Vinda(Boman Irani) and his son. Vinda’s wife Indrani(Khushboo)introduces Subramanyam (Pawan Kalyan) into the proceedings and he enters AB group of companies as a normal employee. But after a series of events, a startling fact about Subramanyam is revealed. Who is this Subramanyam? Why did he enter the company? What is his actual mission? Will he be successful in it? To know the answers to these questions, you need to watch the film on the big screen.

The first and foremost thing that hits you right away is the scale of Agnyaathavaasi. The makers have not compromised on the production values and every penny spent is clearly visible on the screen. Yet another biggest and obvious asset is Pawan Kalyan, who carries the film on his shoulders. He looks menacing in fights and does well in certain comedy episodes with Murali Sharam and Rao Ramesh.

Khushboo gets a pivotal role after a long time and it is good to see her perform with a lot of dignity and grace. Boman Irani is wonderful as always and plays an important role. The interval bang of the film is quite good and has been executed well. Rao Ramesh and Murali Sharma’s comedy works only in certain scenes.

Keerthy Suresh looks beautiful and her chemistry with Pawan is good. Anu Emanuel is strictly okay in her role. Last but not the least, main villain Aadhi Pinisetty is decent in his small role but is made to look silly at the end.

The story of the film is quite simple and does not provide much content wise. The film is slow-paced with no proper flow and is dragged most of the times. The proceedings take a lot of time to enter the main story as only the characters keep getting introduced for the first half an hour.

The basic emotion which is associated with all Trivikram films is completely missing in Agnyaathavaasi. There are hardly any family episodes which elevate the film emotionally. The placement of the songs is not proper as songs come out of nowhere.

Heroines do not have much to do with the film as they are used only for the comedy episodes. Certain comedy scenes featuring Raghu Babu are overdone and irritate the audience. The film is also painfully long especially the climax which is stretched for no reason.

Anirudh’s background score is only impressive for Pawan’s elevation scenes. As usual, dialogues penned by Trivikram are decent. The camera work is top notch as the rich corporate visuals are showcased well. Production design looks amazing and so were the action sequences. The way the songs have been shot leaves a lot to be desired. Editing was just about okay as some fights could have been easily trimmed down.

Coming to the director Trivikram, he has done a pretty disappointing job with the film. The way he derived Pawan’s role is good but his direction lacks the punch in many places. Surprisingly, Trivikram has failed to generate the basic entertainment most of the time and narrated the film on a very plain note.

On the whole, Agnyaathavaasi is the story of a son who saves his father’s empire. The film does not live up to the expectations as it has some decent moments only in the second half. Trivikram’s magic is completely missing as he has not succeeded in generating basic emotions and gripping episodes which end up as the biggest drawbacks of the film. Lack of good comedy and disappointing song picturization make things tedious. The only saving grace of the film is Pawan Kalyan as he carries the entire film on his shoulders. Keep your expectations completely in check while watching this film.