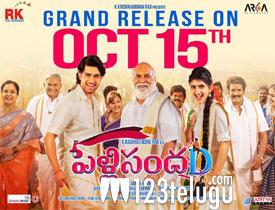 Senior star couple Srikanth and Ooha’s son Roshann has made his debut as a hero with the just released romantic entertainer, Pelli SandaD. The film also marks veteran filmmaker K Raghavendra Rao’s acting debut. These two factors generated a decent buzz for the movie. Let’s see if the film managed to live up to the expectations.

Vashishtha (K Raghavendra Rao) is a Dronacharya awardee and a champion basketball player. He narrates his life story to Rajendra Prasad. The film cuts to flashback and showcases young Vashishtha’s (Roshann) love story. Vashishtha falls in love with Sahasra (Sree Leela) at his cousin’s wedding.

However, conflict arises when Sahasra’s father (Prakash Raj) opposes their relationship and fixes her marriage with her cousin Chintoo (Vennela Kishore). The rest of the story is all about how Vashishtha and Sahasra manage to convince Prakash Raj and win their love.

Debutant Roshann scores well with his handsome looks and confident performance. He surely acquired his parents’ acting skills and displays good ease and has an impressive screen presence. His dancing skills are decent, and he will surely become a star in future if he chooses right scripts. He, however, needs to work on his expressions and body language in emotional scenes.

Veteran filmmaker K Raghavendra Rao, who directed over 100 movies in his 4 decades long career, is okay on his acting debut. His character has nothing substantial to perform. Newbie Sree Leela is a good find. She oozes glamour and confidence equally well. Her energetic acting and dancing skills will sure take her places in future.

Pelli SandaD title has a unique, modern twist to it. But unfortunately, all the innovation ends with the title itself, as the story is age-old and even the execution is lackluster. The film has K Raghavendra Rao’s trademark screen embellishments like fruits, flowers, balls and… nothing else.

Pelli SandaD’s basic story, comedy, emotions, drama and even actors’ characterizations give us a feeling that we are watching 80s and 90s Telugu movies. Pelli SandaD not only gets its title from Roshann’s father Srikanth’s yesteryear blockbuster, Pelli Sandadi, but it also looks and feels like the 1996 film, which means that we are watching a film of the 90s but made in 2021.

Logic goes for a big toss in Pelli SandaD. K Raghavendra Rao’s senior Vashishtha character narrates its flashback, which is at least 6 decades old. But the flashback’s setting, actors’ costumes and production design are trendy and modern and have no nostalgic vibe to them. This is ridiculous and will surely leave audiences baffled.

K Raghavendra Rao, who directed over 100 movies, is the Direction Supervisor of Pelli SandaD. But the least said about the film’s script and direction, the better. Debut director Gowri Ronanki fails to impress with her execution. She succeeds in handling a few emotional scenes in the second half and extracting fine performances from her actors, though.

The production values are decent, but it’s a million dollar question as to why the makers of Baahubali decided to produce Pelli SandaD. Some of the songs composed by MM Keeravani are good on screen. The cinematography is decent, but the editing could have been sharper. Most of the scenes appear pointless and test our patience.

Pelli SandaD is a silly, inane and boring romantic drama that fails to engage us in almost all departments right from the word go. Barring the lead actors’ impressive performances, the film appears outdated and offers absolutely nothing new. You may watch this film if you want to encourage the newcomers. Otherwise, you may catch it up on some OTT platform.