Review : Petta – Rajinified only to an extent 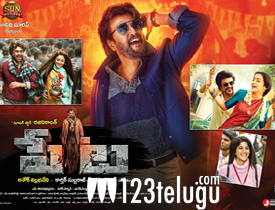 Post the success of 2.0, Rajini is back with a mass entertainer Petta. Also starring Nawazuddin Siddique and Vijay Setupathi, this film has hit the screens today. Let’s see how it is.

Kaali(Rajinikanth) joins as a hostel warden in a college and helps a young pair with their love story which keeps getting into problems all the time. But there is more than what meets the eye as Kaali is saving the couple with a purpose. Who is this Kaali? What is his flashback? and how are Nawazuddin Siddique, Vijay Setupathi, Trisha and Simran connected to the whole story. To know the answers you need to watch the film on the big screen.

Superstar Rajini’s performance and aura in the film is in full display. What fans were missing with Rajini films in recent times, director Karthik Subbaraj adds all those thrills and dialogues which will please the fans. Rajini is as usual superb and holds the film with his amazing screen presence.

Though Vijay Sethupati does not get much screen presence in the first half, his role is given a superb twist in the second half and his chemistry with Rajini is very good. Simran is beautiful even in this age and her love track has been showcased gracefully.

Nawazuddin Siddique gets a meaty role and he is decent in his character. The climax of the film is good as the twist showcased is interesting. Special mention goes to Anirudh who gives a terrific background score which elevates the proceedings completely.

One of the biggest drawbacks is that there is not much story in the film. Off late, all the Rajini films are having the same formulae of showing Rajini as the mature guy with a proper flashback which is getting repetitive now.

There action only starts in the second half and the entire first half an hour of the second half goes for a toss even though key elements in the story are disclosed. These scenes are routine, have nothing new to showcase. It is hard to understand why Trisha accepted the role as she appears only in a few scenes.

As said earlier, Anirudh elevates the film with his music and BGM. The camera work is neat as it showcases the college set up in the beautiful locations of Simla. Dialogues are super fun and especially those written for Rajini will please the fans. Editing is disappointing as close to 10 to 12 minutes in the second half can be easily trimmed.

Coming to the director Karthik Subbaraj, he is a massive Rajini fan and showcased the star through the fans point of view. It is perhaps his weakest film in terms of script and narration with only a good twist in the end.

Fans of Rajini had a general complaint that they were missing the trademark Rajni and his fan moments as he was playing mostly mature roles. But director Karthik Subbaraj has showcased all those thrills in high spirits which will please the hardcore fans. Apart from the fan factor, this film does not have the story or gripping narration which will please the regular audience and ends as a below average watch this weekend. Watch it only for Rajni.