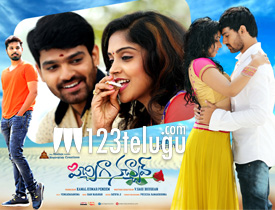 Piccchaga Nacchyav marks the debut of comedian Uttej’s daughter Chetana Uttej. The youthful love story has finally hit the screens today. Let’s see how it is.

Upset by the games played by today’s generation girls, Chandu lays a challenge to Anu to get close to him physically to prove her true love. What will Anu do now? Will she go ahead and do the inevitable? To know these answers, you need to watch the film on the big screen.

The plot chosen is quite realistic and goes well with today’s generation mentality. The interval bang and the manner in which the hero lays a condition to the heroine have been executed decently. Nandu looks handsome and plays his part well.

Certain emotions surrounding Chetana’s character have been dealt well by the director. Even though Chetana Uttej looks just about okay, she has done a decent job with her performance. The way she has showcased some strong emotions during the second half proves that she is a decent enough actor.

The film takes a lot of time to get into its actual story. The first fifteen minutes are quite bland and do not have much to offer. The comedy episodes featuring hero’s friends are outright silly and spoil the flow of the film.

The climax of the film is stretched to no extent. The entrance of Naga Babu and the way he helps the hero, all these things look out of place and unrealistic. As the twist is revealed post the interval, certain scenes become quite predictable and routine. The film also suffers from a lackluster supporting cast which does not bring much depth to the film.

Production values of the film are decent as the small town set up has been showcased convincingly through some very good camera work. Dialogues are contemporary and suit today’s fast-paced lives. The screenplay is just about okay as the film has a roller-coaster kind of a feel. Music is below average as none of the songs are worth a mention. Coming to the director Sesi Bhusan, he has written a decent plot but his execution is just about okay.

On the whole, Picchaga Nacchav has a decent plot but an inadequate narration spoils the fun. Interesting interval bang and an emotional performance by Chetana Uttej are some assets. The lack of known faces and irritating comedy side track the film most of the time and make it a below average fare this weekend. Watch it only if you have absolutely nothing to do.