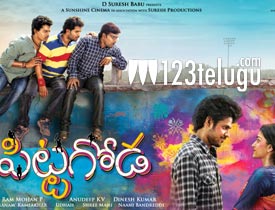 Pittagoda is one film which has been making a good buzz off late. With Suresh Productions backing this film, things have become quite interesting for this small town love story which has released today. Let’s see how the film turns out to be.

The film is based on the lives of four close friends who live in the small town of Godavari Khani, Telangana. Not serious about their lives, this group decides to somehow make it big and plan to organize a cricket tournament in their area.

Things seem to go as planned until Tippu(Vishwadev), one of the friends falls in love with Divya(Punarnavi) and halts the cricket tournament all of a sudden. This creates huge differences between the close friends and even lands all of them in jail.

Why did Tippu do all this? How do the close friends get reunited? and What happens to Tippu’s love story? That forms the rest of the story.

What clicks with Pittagoda are the realistic emotions of the middle-class people. Right from the set up of the small town to the actors chosen, everything looks good and believable. The fun generated between the friends, their fathers scolding them daily and the silly things they do in life are so natural and executed beautifully.

Heroine Punarnavi makes a very good impact as the leading lady. She looks pretty and also portrays her role quite sincerely. Vishwadev also makes a decent debut as the hero. The chemistry that is generated with small time romantic elements is quite good.

The first half of the film is quite entertaining and halts with a good bang during the interval. Also, the director makes sure that there not much melodrama and unnecessary scenes till the last 15 minutes. Jabardasth Ramu and his friends do their roles superbly.

The free-flowing film with some very good proceedings falls flat during the last 15 minutes and disturbs the flow of the film completely. For no reason, the director narrates things in a hurry and wraps the film in no time.

The most important factor of friendship is forgotten in this chaos. There should have been at least a scene to showcase that the friends are back together. Many other scenes like this featuring the villain and other twists are just hurried and disappoint the audience.

Coming to the director Anudeep, he makes a very decent debut. He chooses a small time love story and places it nicely between some very realistic characters. His strength lies in the way things are narrated with no unnecessary melodrama. Had he taken more care of the climax, things would have been superb for this film.

On the whole, Pittagoda is small town love story which has its heart in the right place. Simple setting, decent comedy, and elegant love story are huge assets. If you are quite okay with the predictable nature and don’t mind the routine and hurried up endings, this film with with some realistic and feel good emotions ends up as a decent watch this weekend.