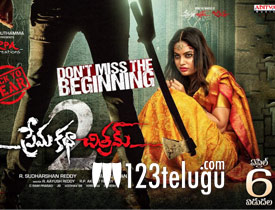 Prema Katha Chitram 2 has been in the news for a long time now. After a brief round of promotions, the film has hit the screens today. Let’s see how it is.

Sudheer(Sumanth Ashwin) is a college student who is deeply loved by Bindu(Siddhi Idnani). But to her bad luck, Sudheer loves Nandu(Naditha Swetha) and this does not go well with Siddhi who kills herself and comes back as a evil spirit to irritate everyone. Rest of the story is as to how the evil spirit enters Nandu’s body and troubles Sudheer and his friend.

The climax of the film has been handled well and has some decent thrills. Siddhi Idnani is the best of the lot and does her role extremely well. Her role gets a good elevation and she was impressive.

Sumanth Ashwin is okay as the main lead but he did not have much to do in the film. Vidyu Raman was very good in her comical role and her expressions in one of the scenes with the evil spirit was hilarious. The last ten minutes of the film makes some sense and has been handled well.

There are way too many drawbacks in the film and it is hard to list them all here. The basic writing of the film itself has no base and clarity. The film is not a sequel as only names and some references from Prema Katha Chitram have been taken which do not work one bit.

The entire first half goes for a toss as not even one single episode works here. If this was not enough, Nanditha Swetha hams to no extent with her loud acting and irritates you to no extent. The comedy done by Sumanth Aswin’s side kick is cheap and vulgar.

The basic intention of the film is known only in the climax but to showcase this, there was a need of a basic screenplay which was missing in the film. The film does not have any horror comedy and irritates you most of the time with no direction at all.

Coming to the director Hari Kishan, he makes a horrible debut and fails in his narration. Maybe his thought process behind the story was good but the manner in which he starts the film and narrates it in a meaningless manner is quite disappointing and horrendous for the audience.

On the whole, Prema Katha Chitram is a horrendous horror comedy which does not work one bit. The makers have spoilt the name of the franchise by showcasing some over the top comedy and loud performances which kill the interest of the audience in no time. Except for the last ten minutes in the climax, this film does not have anything meaningful to watch out for this Ugadi. So, keep your options open and opt for something sensible this weekend.