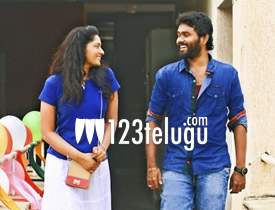 Continuing the trend of low-budget films, yet another romantic comedy “Premalo Padithae-100% Break Up” has hit the screens today. Let’s see how it is.

Veera(Ezhil Durai) is a passionate guitarist who wants to make it big in the music industry. After a few years, he joins a college for his graduation course and falls in love with Anushka(Mathumitha).

He tries hard and somehow manages to woo her. After a few months into their affair, the couple breaks up because of several misunderstandings. Rest of the story is as to how Veera deals with his breakup and what happens to Anushka during the course of time.

Heroine Mathumitha impresses with her innocent looks and does well in the acting department too. The youth audience will connect with many dialogues in this film which are quite contemporary and funny too. Noted actress Abhinaya gives a good performance as hero’s friend and brings some depth to the film.

Though the film comes under the simple rom-com genre, the director misleads the audience with some unnecessary suspense scenes. The entire first half showcases a missing case investigation which is below par and does not help the film one bit. The first half is a bit slow and takes time to get into the main plot.

The screenplay of the film is confusing as many scenes are not narrated in a proper way. The supporting cast is below par and does not help the film one bit. Lack of known faces will go down against the film heavily. Telugu dubbing done is not up to the mark as there is heavy Tamil flavor in the film.

Ezhil Durai should be appreciated for handling multiple tasks like direction and acting. His simple and natural dialogues will impress the youth audience but the way he executes the film in crunch situations lacks depth. The cinematography is okay. Editing work is good and the production values are also decent for this low budget film. Background music is decent and fits the rom-com genre well.

On the whole, “Premalo Padithae 100% Break Up” is a new age breakup love story which has some passable moments here and there. But a confusing and slow narration diverts your mood most of the time. All those who have been through a breakup will relate to some scenes in the film. But for the rest, it is just another boring romantic drama which can be ignored this weekend.