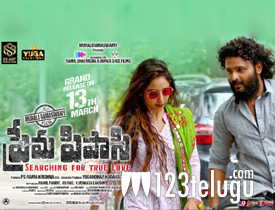 Prema Pipasi, a romantic love story being directed by Murali Ramaswamy has hit the screens today. Let’s see how it is.

Bawa(GPS), is a frustrated youth who always flirts with girls. In this process, he comes across a girl named Bala(Kapilakshi Malhotra ) and falls for her instantly. Will Bala accept Bawa’s proposal? Who is Bawa and what is his frustrated backstory? Is there any connection between Bawa and Bala in the past? To know this, you have to watch the film in the theaters.

Hero GPS is good in his role as a depressed youth and his performance in the character that has various shades is decent. While he is okay as a flirter in the first half, his painful emotional acting in the second half is impressive.
Heroine Kapilakshi is cute and did her part nicely.

Actor Suman plays a key role and the senior actor did a good job and brought a lot of depth to the film. A teasing song that comes in the second half is good. A few romantic episodes in the first half will enthrall the targeted youth audience. The chemistry between the lead pair is good.

Though there are a few romantic scenes in the first half, most of the narration during this time runs on a dull note. Almost the entire first half is wasted with the character establishment of the hero which diverts the audience’s mind after the first thirty minutes.

After a decent narration in the second half, the audience will expect a refreshing romantic ending but things are hurried up on a routine note. The core reason for the hero turning into a flirt has not been projected in an effective manner and this lacks the basic impact.

Director Murali Ramaswamy’s intention to showcase the actual happenings in contemporary love stories is good but he should have presented it in a more authentic way. Instead of wasting time in establishing the hero character, he should have at least inserted comedy tracks for a better output.

The cinematography by Thirumala Rodriguez is decent and so is the case with the editing work by SJ Shiva Kiran. R’s music is good at parts as two songs and the background works in the film. Production values for the film are good and the makers have spent money on various outdoor locations.

On the whole, Prema Pipasi is a youthful love tale that has a few moments in the second half. Hero GPS’s painful performance in the second half is good. But lack of proper screenplay and uneven narration in the first half makes the film dull and boring watch this weekend.