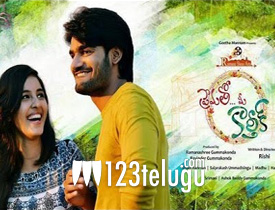 Prematho Mee Karthik is one film which was promoted quite decently. Karthikeya and Simrat Kaur play lead roles in this film which has hit the screens today. Let’s see how it is.

Karthi(Karthikeya) is an NRI who has no emotions and family attachments at all. As promised to his father, Karthi visits India and there he gets close to a girl called Anjali(Simrat Kaur). Who is this Anjali? What kind of changes does she bring in Karthi’s life? Will Karthi change his mindset? What happens to this love story? That forms the rest of the story.

Looks wise, hero Karthikeya is okay and gave a decent performance in his role. He tried to show good variations in both the roles of a business-minded NRI and a guy who is desperate about family bonding.

Heroine Simrat Kaur is one of the main plus points of the film. Her cute and bubbly looks will impress the audience and she also gave good performance in her crucial role.

Legendary actor Gollapudi Maruthi Rao did complete justice to his role. Murali Sharma, who acted as hero’s father has brought depth to the proceedings with his performance.

The proceedings during first half take too long to establish each character. Family emotions showcased during the second half lack naturality and fail to impress the audience.

A few father-son related scenes during first thirty minutes look overboard. The climax sequence and the way it is narrated may not appeal to the larger session of the audience.

Debutant director Rishi has come up with a good storyline but failed to execute it with a soulful narration. He tried to showcase some hard-hitting family emotions in the latter half but disappointed the audience with his artificial narration.

Cinematography by Saiprakash Ummadisingu is top notch as he tried to capture some natural locations beautifully. He set every frame in the film perfectly. Editing work is good as the film’s runtime was short and crispy. Music by Shaan Rahman is decent. Production values by Ramanashree Arts are very rich.

On the whole, Prematho Mee Karthik has a good concept but the director disappoints with his slow-paced narration and predictable proceedings. Though there are some good family emotions here and there, the film fails to impress most of the times. Those who want to watch some rich frames and beautiful locations can give this film a try and the rest can take it easy.