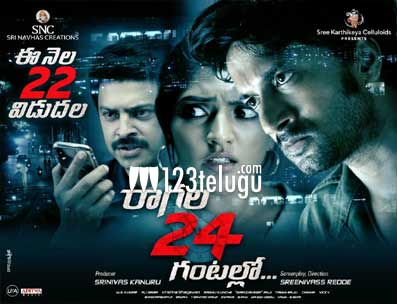 Eesha Rebba is now a year position and she is trying hard to escape from her deadly situation. 24 Gantallo is Eesha Rebba’s first female oriented film in her career. It has hit the screens today. Lets see how it is.

Rahul(Satyadev) is a star photographer who falls in love with Vidya(Eesha Rebba), an orphan. But Vidya’s closeness to her friend Ganesh(Ganesh Venkatramam) does not go well with Rahul. So he starts torturing her and when things get out of hand, a heated argument erupts between Vidya, Ganesh, and Rahul. In a freak situation, Rahul gets killed. Who killed Rahul? Is there another angle to this film? To know the answers, watch the film on big screen.

Satyadev is the star of the film as he brilliant in his negative role. He is a versatile actor and proves it once again with this film. All his scenes with Eesha Rebba and the way he shows his sadistic nature throughout is superb and main highlight of the film.

Eesha Rebba gets a meaty role and she does supremely well in her character. She is pretty good with her emotions and did well in all the key scenes. Hero Sriram was decent in his cop’s role and so was Ganesh. Ravi Varma was impressive in his tiny but effective role.

Even though the film does not have major twists and turns, it has been narrated in an engaging note. There are not many dull moments in the film as the director Srinivas has kept things at pace. Muskan Sethi was okay in her role.

There are a few logics which go missing in the film. The audience get several doubts about how the murder happens when Eesha is present in the house. More clarity should have been given on this episode.

As said earlier, there are no major twists and those showcased in the key climax are predictable and have been brought in on a simple note. The screenplay goes for a toss during this time.

The film has decent production values. Most of the film happens in a bungalow and all this is captured well by the camera man. Editing is decent and one song which comes on Muskan Sethi in the end should have been chopped off. BGM is impressive and so was the production design. Eesha’s makeup in a few areas was gaudy.
Coming to the director Srinivasa Redde, he has done a decent job with the film. He did not experiment too much and narrated the film with simple twists and engaging scenes making it breezy for the audience.

On the whole, Raagala 24 Gantallo is a watchable suspense thriller which is narrated in a breezy manner. There are no great twists or turns but the suspense showcased holds the audience attention in a decent manner. So, go in with minimum expectations as the film ends as an easy time pass watch this weekend.