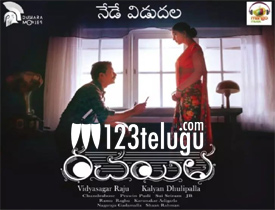 Impressed with the film’s content, star actor Jagapathi Babu took the initiative and promoted a small film titled Rachaitya. Directed by Vidhya Sagar Raju, the film hit the screens today. Let’s see whether it impresses us or not.

Reputed novelist Aditya Varma (Vidhya Sagar) decides to go to a peaceful place to write a new novel and takes his childhood love Padmavati ( Sanchita Padukone ) along with him. Soon after reaching the destination, Aditya starts noticing unexpected changes in Padmavati’s behavior. What kind of changes Aditya notices in Padmavati? Is there a specific reason behind Padmavati’s change of behavior? How will Aditya fix all the issues and win his love? You will have to watch the film to find out more.

Heroine Sanchita Padukone looks good and even her performance is impressive. A few emotional scenes which come in the second half of the film are executed nicely. The way the entire 1950’s setup was recreated is good and sets the mood right.

The storyline is revealed only at the interval and till then, the director prolonged the narrative with many unwanted scenes and a boring screenplay. A comic character which comes in the second half of the film has no proper justification. A few outdated comedy scenes end up diverting audience’s attention.

As said above, though director cum actor Vidya Sagar wrote and performed Aditya Varma’s role impressively, lack of a strong storyline and an interesting screenplay dilutes the impact. Editing by Praveen Pudi is not up to the mark as many unwanted scenes in both the halves can be easily chopped off. Sai Sreeram’s cinematography is just about okay. Visual effects are ineffective and stand as a big let down. Music by JB and Shah Rehman is decent as they gave some good background score in a few crucial portions of the film. Production values in this low budget film are alright.

On the whole, Rachaitya is a normal horror-thriller with an age-old narration. Though lead actors’ performances and a few emotional scenes that come in the latter half are good, the film is diluted due to lack of a strong screenplay and gripping narration. Those looking for a good weekend watch may ignore this film.