Review : Rahadari – Roadblocks all the way 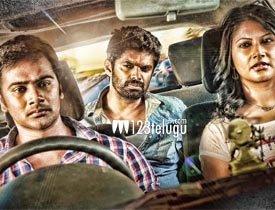 Yet another Tamil dubbed movie which has made its entry in Tollywood this week is Rahadari. Let’s now see how this film turns out to be.

The movie revolves around the story of Raj(Abhishek) and Sneha(Shwetha) who decide to run away from their parents and get married secretly. One fine day, the couple elope from their home town and head towards Hyderabad.

On their way towards the city, they give a lift to a guy without knowing the fact that he is a huge psycho(Ravi Zacharias). Things become even more scarier for the couple when they find out that the so called person sitting in their car has run away from a rehab and is also a serial killer.

Who is this serial killer ? What is his back story ? Why has he targeted this couple ? and how will they escape from him ? That forms the rest of the story.

The genre of the film is quite interesting and the way the proceedings are slowly unveiled during the beginning is quite impressive. Ravi Zacharias, who did the role of a psycho is excellent in his role. The manner in which he goes about his character is interesting and he holds most of the scenes with his impressive act.

The lead pair Abhishek and Swhetha also do a decent job in their respective roles and bring out decent emotions during crunch situations. The location chosen and the production values are very good.

One of the key elements for a crime thriller is the nail biting screenplay. Sadly, this film has a pretty weak screenplay as most of the scenes look out of place. The so called thrills that have been showcased are also below average and does not give you that edge.

Also, the story of the film is quite routine. The reasons for the villain turning into a psycho and him killing everyone, certain facets like these have been showcased in many films in the past. Second half is a huge let down as many predictable scenes come up one after the other making the film boring.

Camera work is top notch. The way Kishore Mani lights up every scene and especially his night mode effects are superb. Rahul Raj’s background score is decent and manages to elevate the film to a decent level. Editing is just about okay but the film could have been easily trimmed in the second half. Coming to the director Mani, he has done a good job with the plot but his execution lacks the punch as he fails to bring out the necessary thrill factor.

On the whole, Rahadari starts off on a positive note during the first half and has some decent moments going its way. But the story fazes out during the second half and becomes hugely predictable and mundane for the viewers who expect some decent thrills. Except for some interesting moments featuring the lead pair in the first half, this film has nothing much to offer and can be watched when it is aired on TV.