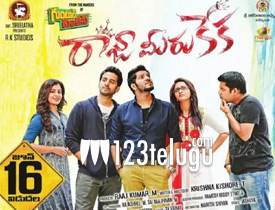 Continuing the trend of small budget films, yet another movie Raja Meeru Keka has hit the screens today. Let’s see how it is.

Ravi(Revanth), Swetha (Lasya), Shashank(Noel) and Seenu(Hemanth) are four best friends who are happy with their respective jobs. One fine day, a person named Nagaraju(Tarak Ratna) who owns an MNC enters the scene and creates a big disturbance in the lives of these four friends.

What is that disturbance? How are Nagaraju and these four friends connected? How do these friends solve their problems? That forms the rest of the story?

The way director Krishna Kishore has based his story using some true incidents looks good. Anchor Lasya is impressive on screen and gives a decent performance in her limited screen presence.

Looks wise, Revanth is good and does okay in his role. Noel Sean is very good with his energetic performance. Mirchi Hemanth’s comedy timing and expressions are superb. Mainly, all his episodes with his father are hilarious.

Tarak Ratna, who is back after a short gap is impressive in his negative role and gives a settled performance. Heroine Sarayu is good looking and suits the film well.

Though the director has chosen some true incidents, he completely failed in executing it. The film starts with an entertaining pattern but loses its grip after some time.

Posani was not utilized properly. Thirty years Prudhvi’s comedy has no proper timing or finishing. Films which come with this kind story line should have proper conclusion and solution but the director has totally taken side track with an abrupt ending.

As said above, the way director Krishna Kishore deals with the film is highly disappointing. Editing by AV Prasad is not up to the mark as many unnecessary scenes can be easily chopped off. Camera work by Ram.P.Reddy is decent. Music by Sricharan is okay but his background score impresses in parts. Production values are just okay.

On the whole, Raja Meeru Keka has a good point script-wise but is completely let down by some shoddy execution. Except for Hemanth’s performance and his hilarious track with his dad, this film lacks proper depth in the proceedings and makes a boring watch for this weekend.