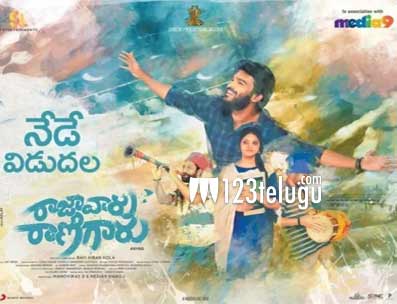 Raja Vaaru Rani Gaaru created a decent buzz with its impressive trailers. The village love story has hit the screens today and let’s see whether the film lives up t all its expectations or not.

Raja(Kiran Abbavaram) is in neck-deep love with his childhood crush Rani(Rahasya Gorak). But his problem is that he cannot express his feelings to her. Things come to a stage when Rani leaves her village and goes away for higher studies for over three years. But Raja’s love for her never dies. Finally, Rani comes back to the village and happily ends up with Raja. Well, how does all this happen forms the main crux of the story?

Credit should go to director Ravi Kiran Kola for narrating the film with many heart-touching moments. The film has a very ordinary story but holding it through the end is a tough job but the director handles it in a very simple and neat manner.

Performances are one of the biggest assets of the film. Hero Kiran is perfect in his role as a shy lover. His performance was good in all the emotional scenes. Heroine Rahasya is quite impressive and expresses with her eyes. Through the film, she does not get to do much but nails it in the climax.

But the stars of the film are the hero’s two friends who play Chowdary and Naidu’s characters. They have given a superb performance and entertain you thoroughly. Their comedy timing, emotional act and the screen presence they give is a big bonus to the film. Especially Rajkumar Kasireddy, who plays Chowdary is hilarious.

The first half of the film is filled with fun-filled moments between the friends, school romance and neat comedy which keeps you hooked. The camera work is just stunning as it portrays the Godavari visuals excellently.

There are certain issues with the film. The hero fails to express his love to the heroine in fear of rejection. This point looks good on paper but when you see it with the scenes, it looks over the top in certain places.

The audience gets a feeling that he is wasting too much time doing so, which rarely happens these days. The second half is where the film slows down. The fun part is slightly missing. Instead of showcasing the entire Bava track, the director should have developed some love track or chemistry between the lead pair.

The lead pair roam with each other but nothing happens much. This point looks a bit odd. A good conflict point is missing in the second half.

Music by Jay K is very impressive but his background score was even better. Editing is decent but too many songs take a toll on the film. At least two songs could have been trimmed. Production values are superb and so was the production design. Dialogues were decent and costume design was natural.

Coming to the director Ravi Kiran, he is surely an exciting talent to watch out for. His making honesty and it is only his first film, things will get even better in the coming days. Had he made the second half even more dramatic, things would have been even better.

On the whole, Raja Vaaru Rani Garu is an authentic village drama that has decent romantic and fun moments. The old school romance has been narrated well but is very slow and one needs a lot of patience to enjoy it especially in the second half. If you are the one who loves old school storytelling, give this film a shot and the rest can watch it when it is aired on TV.