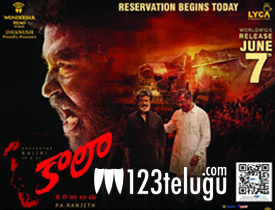 Kaala is Rajinikanth’s much-awaited film in the recent times. After a bit of delay, the film has finally hit the screens today. Let’s see whether the film lives up to its hype or not.

Kaala(Rajinikanth) is a demigod in the Dharavi slum area of Mumbai. Many corporate companies keep trying to evacuate the slum and build new age constructions in that area but Kaala and his group always stop it from happening. But things get tough for Kaala with the entry of Hari Das(Nana Patekar). A massive tug of war kick starts between the rich and poor and the rest of the story is as to how Kaala comes out victorious in his mission and saves Dharavi and its people from being the soft target of people like Hari Das.

Rajinikanth is fierce as Kaala and plays his role according to his age. The usual Rajini swag is in full flow and no unnecessary heroism has been created as Rajini looks and plays his age gracefully. Rajini’s performance in all his confrontation scenes with Nana Patekar is top class. Whenever they confront each other, things look quite gripping and interesting.

Nana Patekar gets a powerful role as the Maharashtrian minister. He is menacing in all his scenes and is a perfect choice to stand against the might of Rajinikanth. Huma Qureshi gets a very interesting character and performs impressively. The romance between her and Rajini has been showcased with a lot of class and dignity.

Eshwari, who plays Rajini’s wife in the film gives a tremendous performance. Her role has been written quite well and works in the favor of the film. The last five minutes before the interval bang is very good as two of India’s greatest actors confront each other in a thrilling manner. The second half too gets serious and runs on a decent note with good emotional scenes.

One of the biggest drawbacks of the film is that the film is painfully slow in the first half. The first forty minutes of the film is very slow and the presence of heavy Tamil flavor can go against the Telugu audience.

The story of the film is ages old and has been tried in several Hindi films in the past. Serious problems, mass episodes, and slow narration can get to those who come in expecting entertainment from Rajini. Lack of novel episodes sidetracks the film a bit. The movie runs on a single thread and this can put you off a bit.

The first thing that comes to your mind when you watch the film is the scale of the film. Many would be surprised to know that the film has been shot in a specially erected Dharavi set in Chennai. Not once in the film, this looks fake as the excellent camerawork makes things look realistic. Santosh Narayanan needs to be credited for his thumping musical score which elevates the proceedings to another level. Dialogues are good but the editing was average as the film needs to be trimmed down heavily.

Coming to the director Pa Ranjith, he has made the film keeping Rajini’s political aspirations in mind. He shows him as the demigod of the masses who always helps the poor. Even though he managed to showcase Rajini in a good manner, his narration like in all his films is a bit slow and takes forever to pick up. He has not showcased anything new in the film and stuck to the drama part which will only be liked by the certain select audience.

On the whole, Kaala is a serious revolutionary drama which works in parts. Rajini and Nana Patekar lead from the front and make things interesting for the audience whenever they appear on screen. But the film is a bit slow and takes its own time to enter the main plot. The film will be liked by only a section who like mature and serious dramas but the others need to go in well prepared to what’s coming in their way. If you are okay with this, then Rajini will make sure that the film ends up on a passable note.