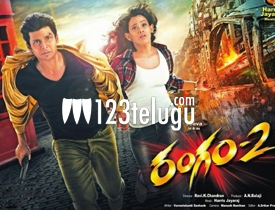 After Shiva Kartikeyan’s Remo releasing all over today, yet another Tamil dubbed film, Rangam 2 has also seen its release. Lets now see how the film turns out to be.

Chandu(Jiva) is a happy go lucky guy who lives in Mumbai along with his grandmother. As time passes by, he falls in love with Srela(Tulasi Nair) but his affair is strictly objected by Srela’s dad(Nasser).

Left with no choice, Chandu decides to head to a gulf country and earn some money and settle down. As soon as he lands there, he gets arrested in a drug case and is put behind bars.

Who is behind his arrest ? How will Chandoo get out from there and win his love back ? That forms the rest of the story.

The way the film is set in a gulf country and the manner in which the hero gets stuck is pretty interesting. The opening sequence of the film and the way in which the lead pair fall for each other have been showcased well.

Interval twist is also yet another asset of this film. Jiva does a decent job in his role and tries hard to carry the film on his shoulders. Tulasi Nair delivers a very good performance in the film.

Nasser is effective in his role and so was Jaya Prakash. The comedy that is showcased featuring the lead pair is decent in a few places.

Even though the backdrop and story are decent, the narration of the film, for the most part, is pretty bad. Except for the interval bang, the film wanders here and there and kills time with some unnecessary scenes. The length of the film is way too long and takes forever to finish.

There is no basic emotion in the proceedings which is yet another major drawback. The logic goes for a huge toss, especially during the second half. Harris Jayraj’s music irritates the audience to the core and disturbs the flow of the film big time.

The film only becomes watchable because of Manush Nandan’s camera work which is outstanding. The way he has showcased the foreign visuals is top notch. Editing is pathetic and so was the background score. Coming to the director Ravi K Chandran, his thought process is very good but the way he narrates the film is hugely disappointing. His direction is very raw as he failed to generate any emotion and thrill from the proceedings.

The makers of this film planned things so cleverly that they marketed it as the sequel to Rangam and even named it Rangam 2. But sadly, the film is neither a sequel or is up to the quality of Rangam. Except for some stunning visuals, this film is a half-baked action entertainer which does not entertain at all.