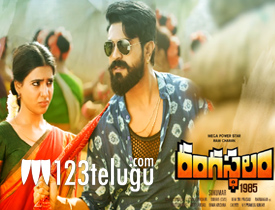 There is no doubt in saying that Rangasthalam is the most ambitious project in Ram Charan’s career. For the first time ever, he has done a village drama in the direction of Sukumar. After a huge round of promotions, the film has finally hit the screens all over. Let’s see whether it lives up to its expectations or not.

The story is set in a backward village called Rangasthalam. Chitti Babu(Charan) is a happy go lucky youth who falls in love with Laksmi(Samantha). This is also the time where the entire village is under the grip of a ruthless president(Jagapathi Babu) who creates problems for the villagers. Upset with this, Chitti Babu’s elder brother Kumar(Aadi) decides to go against the president and faces serious problems. Rest of the story is as to how Chitti Babu takes things in hand and solves all the problems of the village.

Rangasthalam is Sukumar’s beautiful vision coming to light. Every inch of the film, be it the set work, the riveting drama and amazing performances, fall in place perfectly. The entire credit should go to Sukumar for thinking of something like this and pulling it off with such ease and perfection.

This film is a new chapter in the star hero’s career as Ram Charan the actor is born with this movie. Credit should go to him for accepting a role with disability and performing it to the best of his capabilities. Charan is so adorable as Chitti Babu that you fall in love with him instantly. His native slang, get up and the manner in which he unleashes his beastly side is the major asset and will be remembered for a long time to come.

Samantha is a perfect in her de-glamorized role. Sukumar showcases her in a new avatar and Samantha too gives her best as Lakshmi. Her scenes with Charan and the way she showed naughtiness and maturity in her character speaks volumes of her talent.

Jagapathi Babu is menacing as the main villain and brings a lot of depth to the film. How can one forget Aadhi Pinishetty’s superb supporting act. The way he has transformed himself and gave a settled performance is praiseworthy and holds the film together.

Anasuya as Ranagamatha is the surprise package and bowls you over with her looks and emotional performance. She has a meaty role and this film will surely be a turning point in her career as an actress.

One of the basic problems of the film is its lengthy run time. Though it is not an issue for Ram Charan fans, the general audience may find it slightly difficult at times. The item song is not that great and comes as a speed breaker in the film.

After a racy and entertaining first half, post interval scenes start on a dull note without any engaging moments. As the entire film is set up in a village backdrop it may not go well with a certain section of audience as the proceedings are very rustic and showcased in a raw manner.

One of the biggest strengths of the movie is DSP’s thumping music score. His songs are so joyful and create a festive atmosphere in the theater. But it is his background score which makes things even more gripping for the audience. The dialogues written are superb and showcase the Godavari flavor quite well.

Production design needs a special mention as the not once do you get a feeling that most of the film is shot in a set. Such is the finesse of the art direction department. The production values of Mytri are so good that the 80’s effect has been created in a spectacular way and Ratnavelu’s camera work takes things a notch higher. Editing is okay but some scenes relating to Aadi could have been trimmed in the second half.

Coming to the director Sukumar, this is undoubtedly his best work to date. Tollywood has been missing these rustic village dramas and Sukumar is bang on with his story and narration. The way he sets the plot in a rural area and showcases the politics and negativity is good. His conviction is showcased through the stellar performance of the entire star cast.

On the whole, Rangasthalam is a riveting village drama which has some electrifying moments at regular intervals. The village set up, human emotions, romance, and Ram Charan’s fantastic act as Chitti Babu win you over. The film will be a rage with the masses and the family audience will enjoy it too. If you ignore the slight lengthy run time and rustic nature, this movie kicks off summer with a bang and ends up as an entertaining watch this weekend. Go for it as earthy films like these are hardly made these days.