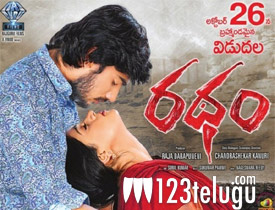 Yet another low budget film which has hit the screens today is Ratham. Directed by Chandrasekhar Kanuri, lets now see how the film turns out to be.

Karthik(Geetananad) is an educated farmer who helps everyone during their time of need. As time passes by, Karthik falls in love with Bujji(Chandni) and the couple decide to marry each other. This is the time when Bujji’s father, Abbulu comes into the picture and obstructs the love story. In order to marry his daughter, he lays a few weird conditions to Karthick. What are those conditions? What is his intention behind all those conditions and how will Karthick fulfill them?. That forms the rest of the story.

Hero Geetanand was pretty decent in his role and gave a settled performance. His acting in crucial scenes with the heroine’s father has come out well as the young actor manages to impress during this time. The actor who did the role of the heroine’s father was quite good with his emotions.

Heroine Chandni was quite impressive as the village belle. Her innocent looks coupled with sincere performance brings a lot of depth to the film. The lead pair’s performance during the climax is quite natural and ends the film decently. The director has elevated the emotions well during the climax.

The drama between the lead pair which was quite crucial for the film was not executed well. Some more intense scenes could have made a lot of impact to the film.

Certain emotions in the film look artificial and way too cinematic. Hero’s character was unnecessarily hyped for no reason in many instances. Too many action sequences for the hero hamper the flow of the film.

The main plot is not handled well by the director. When you think the story is going to take a good turn. some illogical and forced scenes are thrown at the audience which makes the film boring most of the times.

Music by Sukumar was quite impressive as most songs sound and look good on screen. The camerawork is neat and shows the natural locations quite efficiently. Production values of this low budget film are quite good. Editing was just okay and so were the dialogues. Coming to the director Chandrasekhar, he has done a half-hearted job with the film. He extracts good performances from his actors and ends the film well. But all the scenes which lead to the climax are not handled well and this is where the film goes down.

On the whole, Ratham is a routine village drama which has a strict few decent scenes. Some emotions, lead pair’s performance, and climax are basic assets. But to feel all this, one has to go through a lot of forced fights, unnecessary heroism and illogical scenes which come during the second half and take the film down. Watch it only if you have absolutely nothing to do.