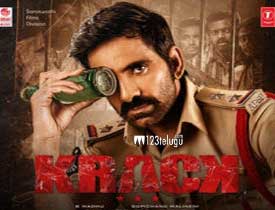 Krack is a film that Ravi Teja is waiting for eagerly. It is the first big hero film that has come out post the lockdown. Let’s see whether it lives to its hype.
Story:

Veera Shankar (Ravi Teja) is a crazy cop who rubs three notorious criminals in a very wrong way in different cities. Among them, Katari (Samuthirakani) is the most powerful and he tries to rebel against Shankar. How far will he go to kill the hero is the whole story of the film?

The backdrop of Krack is pretty good and has a solid mass set up. One of the biggest asset is that Gopichand Malineni has packed the film with enough elements that will attract the masses in a big way. Be it the mass elevations of Ravi Teja and action sequences, Krack has them in plenty and are unveiled nicely at regular intervals.

Upon this, after a very long time, Ravi Teja is in his element in Krack. His body language, dialogue delivery, and mass avatar are at peaks in this film. After a long time, he has also danced quite well in the film. Varalaxmi Sarathkumar is impressive in her negative role.

Thaman is yet another added bonus to the film as he has given a crazy BGM and solid songs. But the other asset of the film is the main villain Samuthirakani who is menacing and gives a tough fight to Ravi Teja. All his confrontation scenes with Ravi Teja have been designed superbly and the masses will just love it.

Shruthi Haasan makes a good comeback and is looking beautiful than ever. But sadly, she is there only for the songs and a few scenes. The placement of fights is perfect and all the situations for them to happen is set up well. All the key fights based on an Ongole gang have been showcased well.
Minus Points :

The story of the film is quite routine and has nothing new to showcase. Three villains are brought into the story and how they are connected and what key role they play in the story is only revealed at a very late stage in the film. Because of this, there is no clarity in the story for the most past.

Also, the family scenes between Shruti Haasan and Ravi Teja look forced and were not needed at all. After the initial fifteen minutes in the second half, the pace drops a bit. There is not much story to showcase here at this time and this adds to the extended run time.

Production values of the film are top-notch as the makers have spent a bomb and that is showcased in every scene. The fights need a special mention as all of them are superbly choreographed and look super stylish.

The editing is decent but a few family scenes in the first half could have been trimmed. As said earlier, the music of the film is good. The production design and whole cop set up is pretty good. There was no need to add so many noted padding artists in the film.

Coming to the director Gopichand Malineni, he has done a good job with the film. He has worked well on the mass elements and fights in Krack. His work on key hero-villain episodes and the way he showcased Ravi Teja, his angle with the different villains is pretty good. The best part is that he packed all the elements well and did not bore the audience. The only drawback is his story which has a simple line and nothing much to talk about.

On the whole, Krack is a full-on masala entertainer with Ravi Teja in top form. Though the story is routine and a few logics go for a toss, this film is released at a time when the Telugu audience are hungry for a pakka entertainer. As the film is filled with good songs, solid fights, and proper herosim, it ends as a good watch this Sankranthi and especially a treat for the masses.