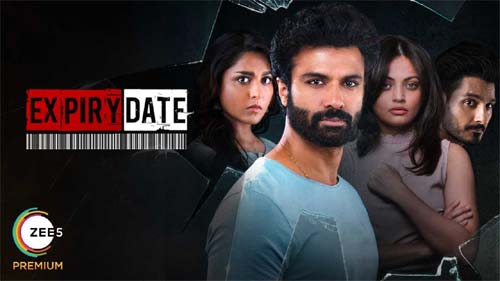 So, continuing the series of reviewing movies and shows during the lockdown period, our today’s pick is the Telugu web series Expiry Date. The series is available on Zee5 and let’s see how it is.

Vishwa(tony Luke) is a rich guy who loves his wife Disha(Sneha Ullal) to death. But he gets the shock of his life when he catches Disha red-handedly sleeping with Sunny(Ali Reza). He makes a perfect plan to kill her but and when he is about to get going, Disha accidentally dies in his arms. Left with no choice, he tries to hide the killing. He goes to the police and files a missing complaint about his wife. He gets another shock when a lady named Nisha(Madhu Shalini) comes to the cops and files a similar complaint that her husband named Sunny is missing. How will the cops deal with this tricky case forms the rest of the story?

Tony Luke had a very good role and tried hard to impress and let’s talk about him later. Madhu Shalini, who has been there for a long time is superb. She as the tense woman who commits the crime holds your attention nicely. The way she showcases these tense emotions especially during the last three episodes was amazing.

Ali Reza also gets a good negative role and he does well. The young actor has good potential to do varied roles and the industry should use him more in the days to come. Bharath Reddy, who plays the cop is amazing. He has a very good screen presence and the way he goes about handling the case in a taut and stylish manner looks amazing. Sneha Ullal is perfect as the cheating wife but does not get much to do. The camerawork, BGM, and visuals of urban Hyderabad are nicely showcased.

The pace of the series is good until the last two episodes. The makers should have ended the show with the eight-episode itself but things are stretched for no reason. The last episode is dragged to the core and there is no clarity as to what happened and how the case was closed.

There is a twist in the end and things should have been showcased in a detailed manner. The dubbing of the series is worst and the one done for hero Tony Luke is horrible. There is no sync in the dubbing and because of this, Tony Luke’s role looks odd. It gives you a feeling that a better and known Telugu actor would have made things a lot better.

On the whole, Expiry date is a crime thriller which has a very gripping screenplay. Even though the story looks straight forward and a bit dragged in the end, the manner in which the director narrates the series makes things quite engaging. Good performances, engaging thrills, and a simple run time of each episode make this series an interesting watch. Go for it.