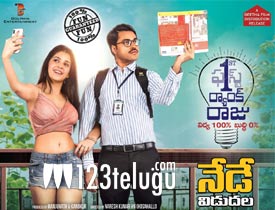 First Rank Raju, the 2015 super hit Kannada message-oriented youthful entertainer, has been remade in Telugu with the same title by the director and producer of the Kannada version. The film stars young hero Chethan Maddineni, Kashish Vohra and several senior and rising character artistes and comedians. The film has hit screens today after generating a good buzz. Let’s see how it fared:

“Book knowledge is better than world knowledge” – protagonist Raju (Chethan Maddineni) has been brought up with this motto by his success-minded parents (Naresh and Rajashree Nair) since childhood. Living up to his parents’ aspirations, Raju tops all the classes and attains the title ‘First Rank’ in the process.

However, First Rank Raju’s studious mindset makes him too naive and nerdy to even do simple things in life, like buying vegetables in the market or reciprocating to a beautiful classmate’s (Kashish Vohra) love proposal.

The conflict in First Rank Raju’s life arises when he fails to secure a plum job at a top MNC despite being a brilliant student and successfully acing the interview. How this life transforming incident motivates First Rank Raju to explore the world and discover himself eventually is the main crux of the story.

Of late, we have been seeing how school and college students are tragically ending their precious lives due to excessive pressure to excel in studies and get top ranks for a ‘successful future’. In this scenario, First Rank Raju becomes quite an important film that not only reflects our pathetic education system, but also teaches a thing or two about parenting and teaching the right way.

The film features a solid supporting cast. Senior actors like Naresh, Prakash Raj, Posani, Brahmanandam and young comedians like Vennela Kishore and Priyadarshi who keep the audience engaged. Especially, Vennela Kishore’s hilarious comedy in the second half is one of the main highlights of the film.

Coming to the lead cast, Chethan Maddineni as the naive bookworm First Rank Raju gets his look right both in the first half and after he transforms himself as a stud with attitude in the second half. He acts well in the climax episodes, and this shows improvement in his performance with each film. Mumbai actress Kashish Vohra as First Rank Raju’s classmate Sruthi is chirpy and performs well too.

A lethargic narration of an otherwise important and interesting plot is the major drawback of the film. Especially, the first half is entirely used to establish First Rank Raju’s naive and innocent characterization, one scene after the other. It’s only before the last 15 minutes of the interval that the film actually gains some momentum, when the conflict arises in Raju’s life.

Even the second half is largely catered to comedy scenes (although engaging whenever Vennela Kishore appears on the screen) than to convincingly show Raju’s transformation and self discovery after he becomes a backbencher.

Too many cinematic liberties often make the narrative unconvincing and illogical. Also, the protagonist’s characterization is outlandish and not everyone will be able to connect with so much of his ‘innocence’.

Writer-director Naresh Kumar fails to keep the proceedings interesting with a lethargic screenplay, which is often laced with unnecessary side tracks such as the college baddies episodes. The production values for the film, which primarily features a relatively new cast, are good.

All the songs are decent and don’t hinder the narrative. Cinematography is okay in the scenes and good in the songs. The editor should have chopped off a few college scenes in the first half to add some pace to the snail-paced narration.

On the whole, First Rank Raju is a satire on today’s education system and how the unending parents and teachers’ expectations are pushing the students to the extremes. It is a partly engaging watch and gets only pass marks as the solution to the problem has not been showcased effectively. Keep your expectations low if you plan to watch it this weekend.