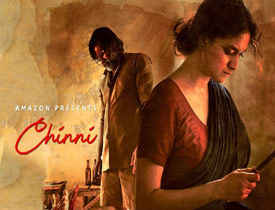 Starring: Keerthy Suresh, Selvaraghavan and others

Keerthy Suresh is back with one more OTT release of hers in the form of Saani Kaayidham. The film is streaming now on Prime Video and let’s see how it is.

Ponni(Keerthy Suresh) is a policewoman who is seeking revenge for the death of her husband Maari(Kanna Ravi) and daughter. Upon this, Ponni is also sexually abused by the upper caste people and is left hopeless in life. This is the time she plans revenge and her only solace to do this is her half-brother Sangaiyya(Selvaraghavan) with whom she shares a bitter past. The rest of the story is about how Ponni clears her differences with Sagaiyaa and fulfills her revenge.

This is the first time that Keerthy Suresh has been seen in such a raw avatar. One can easily say that this is one of Keerthy Suresh’s best performances in her career. Her rustic avatar, and the way she holds her emotions throughout and commits the crime, look brutal on screen.

Slevaraghavan is also a perfect choice as Sangaiyya. He gives a settled performance and though he is not giving more expressions, his eyes speak a lot and he has done well. The way the director has showcased him is also superb. One more added advantage of the film is the amazing BGM by Sam CS which elevates the film and haunts us even after the film gets over.

Though the violence looks brutal and the performances are apt, the emotional depth in the film is a bit low. The bonding between key characters and their chemistry should have been even more gripping.

The film moves at a slow pace for a while and when we come to the end, things are a bit rushed and this does not look good. One expects the climax to be told in a more detailed manner but that does not happen. Also, this film has a lot of gore and is not for all sections.

As said earlier, Sam CS’s music and BGM are very good. Yamini Yagnamurthy’s camerawork is stunning and brings a whole new look to the film. The Telugu dubbing is decent and so were the dialogues. Coming to the director Arun, he has done a good job with the film. Though his narration has an art film kind of a feel, the intensity and the essence in the script is good and engage the audience.

On the whole, Saani Kaayidham(Chinni) is an intense revenge drama that showcases Keerthy Suresh’s versatility as an actress. Though the film takes its time to grow on you and has brutal violence, it can be given a shot for its taut storytelling and unique premise.