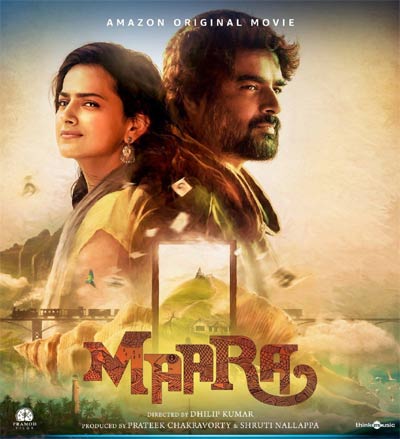 So, continuing the series of reviewing movies and shows on OTT, our today’s pick is Maara, the latest Tamil film on Amazon Prime. Let’s now see how it is.

Paaro(Shraddha Srinath) is an independent woman who restores old buildings. After escaping a marriage proposal, she lands in the house of Maara(Madhavan). Impressed by Maara’s art, culture, and story of his selfless attitude, she decides to find him. She then starts the journey and finding Maara and what happens in the course of time forms the rest of the story.

Such roles are a cakewalk for Madhava. Being and looking like himself, it comes easy for Madhavan and he does well in his role. Coming to Shraddha Srinath, she has a key role and neatly portrayed it. The big plus of the film is that both these actors didn’t try to copy the mannerisms of Dulquer and Parvathy from the original.

Instead, they owned their roles and delivered original performance. The film is a bit slow but the superb camerawork, pleasant BGM, and soothing music by Ghibran score keep you hooked in many parts. Senior actor Mouli is amazing in his role and brings a lot of depth to the film. Ten tense moments in the climax are good.

The film is started on a good note but posts that, the scenes become mundane. Madhavan is just showcased in the backdrop and it is Shraddha who takes the lead. This can go against those who want to see Madhavan leading the way. But the story is like that and unveils at its own pace.

The screenplay is also not that great in mid portions as scenes become dull and have not much interest. Just for the sake of narration, so many unwanted scenes are thrown at the audience. The film is serious and has its own European old-school kind of story telling which will not be liked by many.

On the whole, Maara is a dull remake of the Malayalam film Charlie. Though the performances, backdrop, and visuals are good, the slow pace makes things boring for the audience. All those who love slow dramas can give this film a shot and the rest can take it easy.