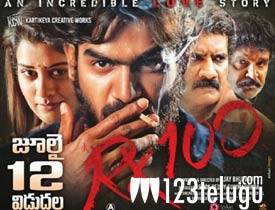 RX100 is one film which has created a superb buzz for itself. The romantic drama has hit the screens today and let’s see whether the film lives up to all its hype or not.

The story of the film is based in a rural village of Godavari and Shiva(Karthikeya) is a rugged head who falls in love with Indhu(Payal Rajput). Love blossoms between the couple and right when the time comes to disclose the affair to their elders, the couple gets separated through a very shocking twist. What is that twist? how will the couple handle this tricky situation? and what happens to them at the end? That forms the rest of the story.

One of the major plus points is the basic concept. A story like this has not been handled so far in Telugu films and is the mainstay of the second half and surprises the audience. Senior actor, Ramki is impressive in his crucial role.

Debutante Karthikeya gets a perfect launch pad with RX100. He gets good scope to showcase his talent and has worked hard on his look and is also good in all the emotional scenes. Heroine Payal Rajput is the surprise package of the film as her role is quite hard-hitting. The young heroine has done her role well and impressive with her role.

The first half showcases decent love story and has some good eye candy which will enthrall the younger generation. The climax is thought of quite well and the emotions work perfectly during the last half an hour. Rao Ramesh is apt in his role and brings a lot of depth to the film.

The film needs serious editing right away. The run time is a tad too long and close to 15 minutes of the film needs to be trimmed. There are close to four songs in the first half and two out of them need to be removed right away.

Certain fight scenes have been prolonged to no extent and this is where things get a bit bogged down in the second half. Also, the film has a hard-hitting premise and this might not go well with every section of the audience.

Music of the film is good but the songs disturb the flow of the film. The background score is apt and nicely elevates the film. Special mention to the superb camera work as it showcases the village set up superbly. Production design is good as the props used in the film to look authentic. Dialogues are superb and those written for Rao Ramesh are amazing.

Coming to the director Ajay, he has done a pretty decent job with his film. His writing is good and narration for most part of the film is impressive. But he sidetracks the film many a time with songs and unnecessary scenes and this is where things get bogged down.

On the whole, RX100 is a very unconventional love story with a twist which is narrated in an interesting manner. Decent performances and interesting setup are basic assets. This is not your regular dance and romance movie as it has many hard-hitting elements which will be liked by the youth. If you are fed up with the routine commercial films and want to see something different, this film is for you.