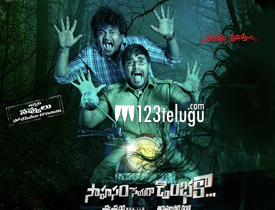 Continuing with the trend of low budget flicks, yet another film, Sahasam Seyara Dimbaka has hit the screens today. Let’s see how it is.

Balaraju(Sri) is an unemployed youth who has the nature of a coward. Seeing his unemployed situation, his uncle gets him a job as an constable in the forest department. Balaraju starts his duty with a lot of fear and keeps going to the forest daily.

One fine day, he comes across Vasanta(Samata) and falls for her charm. As time passes by, Vasanta proposes to Balaraju and he in turn calls his best friend Ram Babu (Shakalaka Shankar) for his advice on marrying Vasanta.

Twist in the tale arises when Ram Babu lets Balaraju know that the girl whom he was talking to all these days and her entire family are all ghosts. Rest of the story is as to how both these scared to death friends escape from the forest and save their life.

Some comedy scenes in the film have been executed well. Sri does a decent job and is apt in his role. His chemistry with Shakalaka Shankar is quite good and has come out well.

Even though Shankar comes in the second half, he manages to create enough laughs. All his scenes with the ghosts are pretty good and evoke decent entertainment.

Both the heroines Samatha and Hameeda are good in their roles and provide good eye candy. Jyothi provides enough glamour for the front benchers in the first half.

As projected by the makers, this film is neither a horror or thrilling comedy. Both the aspects are missing big time in the film. If the makers could have added more thrills and horror elements, the output would have been even more effective.

There was absolutely no need of a special track for Jyothi and Appa Rao. This episode only deviates the subject and breaks the flow of the film. Songs are huge speed breakers and could have been easily removed.

There are certain logics which have gone missing in the film. Narration of the film is quite weak as a simple story line has been stretched to unnecessary extent.

There is nothing much special about the technical aspect of the film. Sri Vasaanth’s music is just about ok and could have been better. Cinematography is average as the visuals lack clarity. Editing by Martand K Venkatesh is pretty bad.

Coming to the director Tirumalasetti Kiran, he has done a decent job with the dialogues but goes haywire in his execution. He loses focus after a while and the output is hampered because of his inexperience.

For the success of any horror comedy, there has to be enough horror coupled with hilarious comedy. But Sahasam Seyara Dimbaka neither scares or entertains you completely. Other than Shakalaka Shankar’s decent comedy in the second half, this film has nothing much to offer and can be ignored this weekend.