Review : Saakshyam – Film for the masses 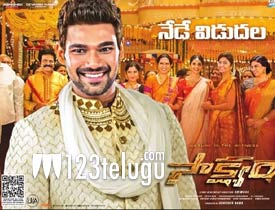 Saakshyam has been in the news for quite some time now as the trailers showcased some very rich production values. After a huge round of promotions, the film has hit the screens today. Let’s see how it is.

Vishwa(Bellamkonda Sreenivas) is a rich NRI who falls in love with Soundarya Lahari(Pooja Hegde). He follows her to India and gets tangled in issues involving her family. Without his knowledge, he faces massive problems from Munu Swamy(Jagapathi Babu) and his brothers and starts killing them one after the other. But behind all this, there is a serious past which Viswa does not know. What is that story? How is Viswa connected to it? and how all this is narrated is the entire story of the film.

Production values of the film are top notch as the makers have gone all out in the making of the film. Every frame looks rich and is filled with a strong supporting cast which does their roles well. One of the biggest assets of the film is the action sequences which have been designed on a terrific note and elevate the proceedings to another level. The masses will love these fights as Bellamkonda has been showcased quite heroically.

Coming to the hero, Bellamkonda Sreenivas has done a decent job in his role and carries all the action sequences with a lot of ease. Acting wise, he has improved a lot in the film. Pooja Hegde looks gorgeous and plays her supporting role well. Her chemistry with Bellamkonda junior is good to see on screen. Lyricist Ananta Sreeram plays a key role and he has done a good job in in the film.

The film is filled with star character actors and Jagapathi Babu leads from the front. He is menacing as Munu Swamy and is ably supported by his brothers Ravi Kissan and Ashutosh Rana. Vennela Kishore is pretty good in his role and cracks up in a few scenes. The interval bang and graphics, in particular, have been designed quite well.

Songs of the film are terrible and come in as speed breakers in the film. When the proceedings catch up a good pace, songs create a disturbance to the flow. Also, the love track between the lead pair is not that great. Some good romance and comedy should have been created to make things better in the second half.

The film starts off well and after the first twenty minutes gets bogged down with unnecessary scenes. This not only creates a lag but makes the audience a bit impatient. The film needs editing as at least ten minutes can be chopped off. The film is good whenever the fights come in but gets sidetracked once they are over.

Even though Harshvardhan Rameshwar’s music is disappointing, his background score is riveting as he makes the proceedings quite gripping with his score during the mass elements. The production design of the film and camera work are top notch. The way New York and other locations of Dubai are showcased looks super rich on screen. Dialogues are good and so were the lyrics by Anantha Sreeram.

Coming to the director Sriwas, he has done a decent job with the film. He has chosen a revenge drama and given it an interesting twist by adding some very good elements like unique fights and emotions. Had he taken care of the love track and got a better music album things would have been even better. Apart from this, Sriwas has showcased Bellamkonda in a good and aggressive manner.

On the whole, Saakshyam is a regular action entertainer with an interesting theme. As long as the superb fights and mass elements take center stage, things look good. But then, the boring songs, dull love track and unnecessary scenes in both the halves pull down the film. The mass audience will surely love the film as it has been packed with good episodes which will keep them entertained. But for those who are looking for something different, this film ends as just an average fare this week.