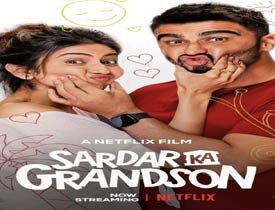 Rakul Preet has been doing back-to-back Hindi films and one of them is Sardar Ka Grandson. Also starring Arjun Kapoor, the film is out now on Netflix. Let’s now see how it is.

Amreek(Arjun Kapoor) along with his girlfriend Radha(Rakul Preet) lives in the US. One fine day, he gets a call from India saying that his grandmother Sardar(Neena Gupta) is in critical condition. Amreeka heads back to India. Upon his arrival, he comes to know about his grandmother’s last wish which is to go to Pakistan and visit her ancestral home. What will Amreek do now? How will he take his ailing grandmother to Lahore and fulfill her wish? To know all this, you need to watch the film.

Arjun Kapoor plays the main lead and he looks lost in the first half. But he does a good job in the latter part as his emotional performance helps the film. Rakul Preet does well in her supporting role and looks pretty.

But the star of the film is Neena Gupta. She gets the main part and does exceptionally well as Sardar. The way she plays a 90-year-old lady with a lot of conviction is so good to see. The dialogues in the film need a special mention. Kumud Mishra does great as the antagonist.

The story of the film looks quite interesting and the emotions of the film score over the slow pace. The second half has some good family drama which has been handled well.

The writing plays the main villain. Though the story is good, there are so many episodes that look forced. The relationship of the lead pair, the scenes in Pakistan, and the way government officials are showcased, things look over the top.

The film is also set in Pakistan and there are some logical errors when things related to the two countries are showcased. Things happen so easily for Arjun Kapoor in a country like Pakistan. The so-called comedy shown does not evoke your funny bone at all.

The production design of the film is pretty good. Music by Tanishk Bagchi is just about okay but his BGM was good and elevated many emotional scenes. The camerawork showcasing Lahore and other parts of Punjab was top class.

Coming to the director Kaashvie, his narration is decent but he has dragged the film for no reason. The film makes sense and is good when Arjun Kapoor starts fulfilling his grandmother’s wish which is showcased through good scenes.

On the whole, Sardar Ka Grandson is a clean family drama with the right intention. While the premise and emotional content are good, the film is filled with boring and unnecessary episodes which deviate the film. If you ignore these aspects, this film can be given a shot during this lockdown period.