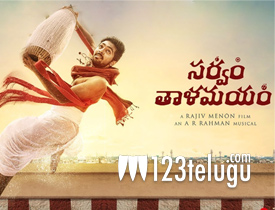 Talented director, Rajiv Menon is back after a long gap with his new film Sarvam Thaala Mayam. The film which has GV Prakash as the main lead has hit the screens today. Let’s see how it is.

Peter(GV Prakash) belongs to a backward class who makes the classical instrument Mridangam. After wasting his life in fan wars, Peter somehow develops an interest in learning Karnatic music. He tries hard to join the school owned the prestigious Karnatic guru(Nedumudi Venu) but he does not get a seat. He follows his instinct and somehow gets a place in his camp. He trains hard to shine but because of a fight involving his batchmate, Peter gets thrown out of the school by his guru. Rest of the story is as to how Peter solves his problems and wins the respect of his guru.

Musician turned actor, G V Prakash has turned out to be a fine actor these days. He plays the young musician’s role perfectly and is superb with his body language and emotions. Legendary actor, Nedumudi Venu is superb as the Karnatic music guru and holds the fort most of the time. All his scenes with GV Prakash has come out quite well.

It was very good to see yesteryear actor Vineeth in a very good negative role. He as the jealousy-filled teacher of GV has done a superb job in the film. The set up of the film is quite realistic as the music and background score by A R Rahman is very good. The film has a decent first half and the last half an hour is interesting. Star Tamil actor, Divya Darshini is also apt as the cunning TV host.

Tough not a demerit, the movie has an art film kind of flavor. The film is filled with Karnatic Keerthanas and has many scenes filled with the instrument being played can be a put off for a certain section of the audience.

The pace of the film is also slow and takes its own time to reach the interval point. The length is also an issue as the film is very long and scenes featuring the lead pair’s track could have been easily edited out. Also, the film’s story is old school and has been rehashed to suit today’s sensibilities.

Major credit should go to A R Rahman as he lights up the mood with this classical touch to the music score. All the songs have been composed well and the last climax episode where the Mridangam playing contest is shown is impressive. Production values are top notch and the dubbing done is also superb. Dialogues are neat and so was the camera work which shows the film in a realistic light.

Coming to the director Rajiv Menon, he has narrated the film in his own style and adds a lot of drama to the proceedings. He takes you in his own world of Karnatic music, how the gurus are exploited and how things are changing in today’s music world. But in all this, he narrates the film in a very slow pace which can take a toll on the overall viewing.

On the whole, Sarvam Thaala Mayam is a film strictly for a selected audience. The proceedings have a feel of an art film and take their own time to grow on you. As the film has an old school charm, the box office prospects will be very low. All those who have a liking for musical dramas will like the film but for the regular Telugu audience, the film will be a below average watch this weekend.