Review : Savyasachi – Thrills to an extent 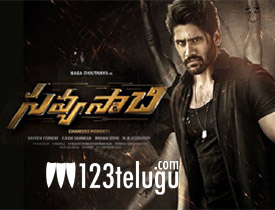 Post the mixed response of Sailajareddy Alludu, Chay is back with an action thriller called Savyasachi. Directed by Chandoo Mondeti, this film has hit the screens today. Let’s see how it is.

Vikram Aditya(Chay) is a guy who suffers from alien hand syndrome where his left hand is not in control most of the time. On the other hand, Vikram falls in love with Chitra(Niddhi Agarwal) and when things seem to be going absolutely fine, his life turns upside down as his brother in law gets killed and his niece gets kidnapped. Rest of the story is as to how Vikram saves his niece and where does Madhavan feature in this entire setup.

The first ten minutes of the film is quite interesting as the vanishing twin syndrome has been established quite clearly. Chay plays his part well and as he has been given a mass elevation, the young hero looks good in all the fights. The action sequences and thrills showcased in the film have been composed well and look good on screen.

Niddhi Agarwal makes a good debut as she looks pretty and has a very good screen presence. Performance wise too, she is neat and if she picks her films well, she can go a long way in Tollywood. Bhumika is okay in her supporting role and so was Thagubothu Ramesh.

Some comedy scenes featuring Vennela Kishore and Shakalaka Shankar evoke decent laughs in the first half. Finally,. Madhavan is pretty good as the main villain and does his best in the second half. His track is pretty ordinary but Madhavan breathes life into it with his performance.

One of the biggest minus points of the film is that the so called alien hand syndrome showcased in the film has not been connected well with the story line. The film starts of well in the first half but slowly becomes a routine revenge drama featuring Madhavan. Things do not make much sense as the concept chosen and the scenes showcased are not in sync.

Post the initial ten minutes of the film, there is no story till the interval scene. So many waste family and silly college scenes are thrown at us for no reason. If Vennela Kishore and Shakalaka Shankar’s comedy track would have not been there, things would have been even worse in the first half.

The Subhadra Parinayam scene and Lagga Yettu song come at a very emotional stage and irritate the audience completely. Even though the subject becomes routine in the second half, the cat and mouse game between Madhavan and Chay does not create the necessary emotional effect and lacks drama.

Production values by Mythri Movie makers are top notch as the film looks rich in every frame. Music by Keeravani is below par but his background score makes the second half better. Dialogues are decent and so were the lyrics. The film needs serious editing as close to ten minutes could have been chopped out to make things better.

Coming to the director Chandoo Mondeti, he has done a below par job with the film. He has chosen a routine revenge drama and added an alien hand syndrome to make hero’s role interesting. But he does not make use of it in a proper way. Also, the way he has under utilized an actor like Madhavan is very disappointing. However, he has showcased Chay in a very good manner.

On the whole, Savyasachi is an average revenge drama which has some decent moments in the second half. The concept is good but it has not been interlaced properly in the proceedings and this where things become routine. As there are no big films in the coming days, there will be a few takers for this revenge drama which can be given a shot this weekend. But don’t go in expecting something really different.