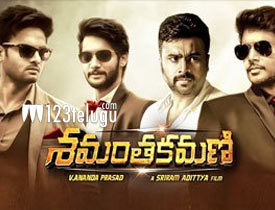 Sriram Aditya’s Samantakamani has been creating a lot of buzz all over. The film which has four star heroes has finally hit the screens today. Let’s see how it is.

The story of the film is based on an expensive car called Samantkamani which is owned by Krishna(Sudheer Babu). One fine day, the car is stolen from a rich hot spot in Hyderabad and a corrupt cop(Nara Rohit) is given the responsibility of nabbing the criminals.

During his investigation, Rohit finds out that a small time crook(Sundeep Kishan), a young lover(Aadi) and a mechanic(Rajendra Prasad) are involved in the case. Rest of the story showcases as to who has robbed Samantakamani and what happens to them during the end.

One of the biggest plus points for the film is the interesting story line. Even though the point is old, the way the story has been set up amidst different characters is very impressive. All the heroes get equal parts in the film as director Sriram has etched out everyone’s role quite convincingly. If Rajendra Prasad’s role evokes good fun throughout, Sudheer Babu’s emotional quotient in his performance is good and one can connect to this role on a personal level.

Even though Sundeep Kishan’s role was small, his experience and screen presence elevate the proceedings quite decently. Aadi does well in his role. Characters like these which suit his age and image will surely take him higher.

Comedian Raghu gets a meaty role and all his investigative and comedy scenes with Nara Rohit are decent. Rohit is pretty solid in his cop avatar and brings a depth to the film. The second half is where all the fun begins as the film is ended quite well with proper justification. Indraja and Rajendra Prasad’s track is well written.

After starting the film on an interesting note, director Sriram Aditya goes into every character’s flashback and their stories. Not that it is bad, but they are a bit slow and take away the interest of the viewer to know what happened to the car.

There was scope of much comedy in many areas but the director stuck to the plot and made it run on a flat note at some places. As nothing much happens during the first half, some commercial elements could have been easily added.

Production values are pretty good as the film mostly runs in the night mode and the camera man showcased the proceedings in a rich light. Dialogues are fun and so was the background score by Mani Sharma. Editing is pretty decent as the crisp run time helps the proceedings big time.

Coming to the director Sriram Aditya, he has chosen a simple story but wrote his characters well. He also scores for choosing noted heroes and this is where the film clicks as the presence of these stars makes the proceedings even more interesting. Direction wise, Samantakamani is a better film than Bhale Manchi Roju.

On the whole, Samantakamani surely lives up to its expectations of a popcorn multi-starrer. Even though the plot is quite simple, the presence of rising stars makes things entertaining. All the heroes should surely be appreciated for accepting the film as more stories and different genres will come up if actors leave their egos and join hands. Finally, if you ignore the slightly dull first half and predictable story line, Samantakamani has okay entertainment and makes up for a fun watch this weekend