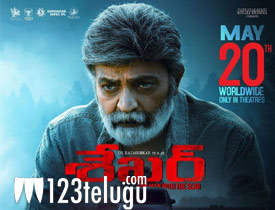 Rajasekhar has pinned a lot of hopes on his latest film Shekar. The film directed by Jeevitha has been released today. Let’s see how it is.

Shekar(Rajasekhar) voluntarily retires from his job as a cop but helps the department in their key investigations. One fine day, his ex-wife passes away suddenly. Shekar has his own doubts and starts the investigation. Shockingly, he finds out that his daughter’s(Shivani) death is also connected to his wife. Who is behind this? And how will Shekar solve the mystery? That forms the rest of the story.

Angry star, Rajasekhar goes for a makeover and does a mature role this time. He as the aged cop looks good and deftly handles the body language and dialogue delivery. The senior hero is good in all the emotional scenes of the film.

Heroine Shivani has a cameo as the hero’s daughter and makes her presence felt. Abhinav Gomatam, Sameer and other supporting cast do well in their roles. The inner turmoil that the character of Shekhar faces has been showcased well.

The second half is where the actual drama starts and the investigation scenes are good and are showcased in detail. The climax and the way the hero’s character is ended look quite good. Prakash Raj was neat in the court scene.

One of the biggest minus points is the thrill that is needed for a suspense drama is missing in key areas. Thrillers have a great pace but in Shekar, it is slow. Though there is nothing wrong with the proceedings, the screenplay is dull and does not make the audience sit on the edge of their seats.

As the subject had good scope for drama, the director Jeevitha should have created more twists and situations to confuse the audience. But the film runs on a single thread and this looks simple to the viewer.

Also, the first half is started on a good note but the love story of Rajashekhar and back-to-back songs deviate from the film. Had the makers narrated the film to the point with an engaging drama, the output would have been even better.

Music by Anup Rubens is quite good and his BGM was also impactful. Production values of the film are top-notch and the able camera work only enhances the proceedings. Dialogues and production design are neat. Editing is just about okay and the first half needs trimming a bit.

Coming to the director Jeevitha she has done a passable job with this Malayalam remake of Joseph. While she neatly sets the film in Araku and also extracted good performances, her screenplay is not that engaging. She narrates the film in a detailed manner without any deviation but the needed masala for a thriller with twists and turns is missing a bit.

On the whole, Shekar is an emotional thriller that has a decent premise and able performances. The storyline is good but the needed thrills and slow pace are slightly missing. If you ignore these factors, Shekar ends up a passable watch this weekend.