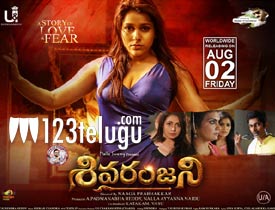 Sivaranjani is a film which has talented stars like Nandu, Reshmi and Nandini Rai in key roles. The film has hit the screens today and let’s see how the film turns out to be.

Karthik(Nandu) is an event manager who gets to know Valli(Reshmi) through an accident. Because of this, Valli forgets her past and Karthik helps her to come out of her trauma. During the same time, an evil spirit keeps bothering Valli all the time. When everything seems to be going fine, Valli remembers her past and things get disturbed between the couple. Who is Valli? What is her connection to the evil spirit? What did Karthik do to get back Valli in his life.? That forms the rest of the story.

Nandu is very impressive as Karthik. He has good screen presence and his performance in the emotional scenes of the climax was very good. The horror scenes which come during the pre-climax episode have been executed well by the director.

Reshmi did a good job in her role. She had a difficult role to portray and she did an excellent job with her emotions. Nandini Rai looked glamorous and played her supporting role quite well. The supporting cast like Dhanraj, Akhil Karthik, and Delhi Rajeswari also did a good job in their roles.

There was a lot of pain in the script which the director did not make use of it properly. There is no proper flow in the proceedings as the narration is jaded and lacked focus. The makers wasted a lot of time by adding unnecessary comedy and horror scenes which were not needed at all.

The climax of the film has been wrapped up in a hurry. After a point, the plot becomes routine and the proceedings become boring and disturb the audience. A lot more work on the script and narration could have made a lot of difference to the film.

Editing is perfect as all the horror scenes have been cut well. Camerawork by Surender Reddy is also very impressive and showcases the film in a good light. Production values of the film are pretty decent. Coming to the director Naga Prabhakar, though his point was good, his execution needed a bit more experience. Had he removed all the unnecessary comedy and silly humor, things would have been even better. Music by Shekhar Chandra was decent.

On the whole, Sivarajani is an outdated horror thriller which does not have anything going its way. Except for a decent romantic track, this film disappoints in many aspects and falls flat with its narration. Skip the film this weekend and look for something else interesting.