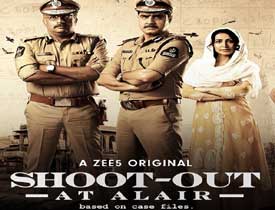 Megastar Chiranjeevi’s elder daughter Sushmitha and her husband Vishnu ventured into the digital medium with a web series, titled Shoot-out at Alair. Directed by Anand Ranga, the eight-episode series is now out on Zee 5. Let’s see how the series is.

Angered by the 2007 Mecca Masjid blasts in Hyderabad, a person named Akhtar starts targeting cops during every anniversary of the blasts. In the process, Akhtar even goes to Ahmedabad, Gujarat, to assassinate the then Chief Minister of the state. In order to catch the notorious criminal, IG Praveen Chand (Srikanth) starts an operation with his special team. What is the main motive behind Akhtar targeting cops? Will Praveen Chand be able to track Akhtar and his network? To know that, you have to watch the series.

Firstly, director Anand Ranga should be appreciated for taking up such a sensitive concept. He made a daring attempt by bringing the Mecca Masjid blasts incident back to the limelight again.

Hero Srikanth as a special police officer is good with his looks and appearance. His intense acting in the crucial episodes brings depth to the proceedings. Teja Kakumanu, who acted as Akhtar, did a fine job, as his mannerisms and acting are apt for his character.

Actor Prakash Raj got an important role as the DSP and he did his part well. All the other artistes who did support roles as cops are okay in their respective roles. Nandini Rai and Gayathri Gupta, who did cameos, are decent in their roles.

Out of the eight episodes, the first two episodes lack a gripping narration, as the main plot of the series is revealed only in the latter episodes.

As the series is an intense drama, everyone will expect some shoot-out episodes, but the series will only create such atmosphere and doesn’t actually have any action and chase sequences.

The cinematography for the series is top-notch and the visualization carries the mood throughout the series. The rustic locations used and the backdrop created by the art department is superb.

Director Anand Ranga’s deft handling of the narrative is an advantage for the series. Lastly, the background score is engaging and quite impressive.

On the whole, Shoot-out at Alair is an intense series based on true events. Though the starting episodes are not that good, the latter episodes get the viewers hooked with good narration and carry the same mood throughout. In one word, Shoot-out at Aliar is a true tribute to all the sincere cops who lost their lives in countering the terrorists.