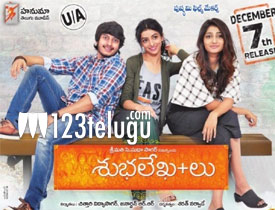 Continuing the trend of low budget films, yet another film which has hit the screens today is Subhalekhalu. Let’s see how it turns out to be.

Chandu(Sai Srinivas) is a creative person who is hated by his family. He comes home to his village to attend his step sister’s wedding. During this time, he also falls in love with his maradalu Sirisha(Priya). On the other hand, Chandu’s step sister is in love with someone else and decides to elope with him. This tense secret of hers is leaked to Chando somehow. Rest of the story is as to how Chando solves this problem and wins everyone’s heart in the family.

Hero Sai Srinivas is a good find and does extremely well in his role. He had a complex role and the young actor did his best by showcasing superb emotions. Sai’s performance during several insulting scenes featuring his family was top notch.

Deeksha Sharma was also good in her role and ably supported the film. The other heroine, Priya also did a fine job in the emotional department. The actor who played the role of hero’s brother was top notch. His love-hate relationship with the hero was nicely executed.

Even though the plot is good, there is not a strong enough conflict point in the film. Because of this, the proceedings become very slow and boring after a point. The emotions in the second half are not elevated well and this happens because of the weakly etched characters.

The love track looks odd and has been forced into the family drama. This also leads to further problems and whenever this episode comes, things become even more irritating. The film has not much entertainment or romance and the basic family drama which is expected falls flat in the second half.

Camerawork by Murali Mohan is decent and shows the film in a neat setup. Editing is below par as many scenes in family drama and love track could have been edited out. Production values are just about okay. Coming to the director Sarath, his point is good but the way he narrated the proceedings on a dull and predictable note slows down the film and spoils the proceedings.

On the whole, Subhalekhalu is a disappointing entertainer which fails in its narration. Even though the concept is good, the film does not have engaging moments and moreover, a dull set up brings the film down in no time. There is nothing new that you can look forward to in this film and hence can ignore it this weekend and watch something else.