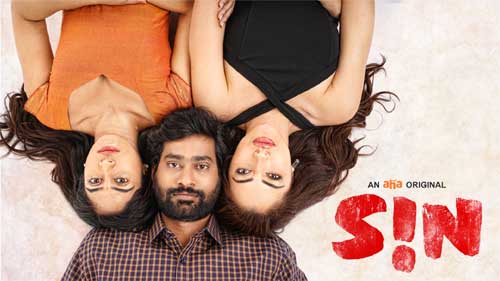 So, continuing the series of reviewing movies and shows during the lockdown period, our today’s pick is the Telugu web series SIN. This series is produced by Sharath Marar and is directed by Naveen Medaram. It was released on 25th March and is now available on AHA.

Anand(Thiruveer), works in a Women Empowerment Cell and is a big pervert from inside. He marries Nandita (Deepti Sati) just for his physical satisfaction and this nature of his is known to her right away. Things take an ugly turn when Anand has an affair with Nina. Even the beautiful Nina(Jeniffer Piccinato) falls for Anand not knowing that he is married and is in the relationship just for sex. What turns does the triangle love story take form the basic crux of this web series?

The main lead Thiruveer is terrific in his two-layered role. The way he brings his innocence and tries to hide the animal inside him has been showcased well. The main plot is about marriage and how innocent girls face marital rape. Some scenes about women’s empowerment are good. The BGM and aesthetics used to make the series look authentic. The basic twist in the plot will leave you surprised.

Overall, SIN starts off well dealing with the topic of marital rape. There is an overdose of adultery involved but the performance of the lead cast is pretty impressive. The twist in the climax is surprising and bold but the series could have been narrated emotionally from the beginning. Give it a shot as it has crisp runtime and some good moments.