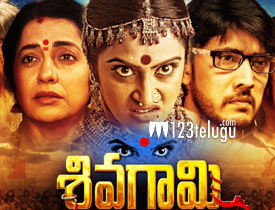 Continuing with the trend of dubbing films, yet another project which has come out this week is Sivagami. Let’s now see how this dubbed version of the Kannada hit Nani turns out to be.

The movie is based on a couple played by Manish Arya and Priyanka Rao, who occupy their ancestral bungalow in Vizag. Things look good at the beginning but as time passes by, an evil spirit present in the bungalow enters Priyanka’s body and starts creating havoc for the entire family.

Who is this evil spirit ? Why did it target the couple ? How will the couple survive this chaos ? That forms the rest of the story.

The entire flashback episode that comes during the second half is pretty good. Based on some true events during the 90’s, the way things have been recreated during this flashback looks good.

The horror elements showcased in the film are pretty ordinary. The director uses too much time to unveil them and when the actual time comes for them to scare the audience, things fall apart.

Sivagami lacks novelty. Everything is routine and has been showcased many times in the past. As the second half is completely based on the evil spirit, some thrilling elements and scenes should have been added to make things interesting.

Once the suspense is revealed during the end, the climax becomes routine like any other horror film and bores the audience completely.

Screenplay of the film is the biggest drawback. As the concept and narration is quite tested and outdated, things look ordinary and you exactly know what is going to happen next. Production values are decent. Editing is bad as songs create a huge disturbance to the flow of the film. Coming to the director Sharath, he has done a very poor job with his direction. He does not include any interesting horror elements and makes the film quite predictable till the end.

Sivagami is yet another routine and outdated horror drama which does not thrill you at all. The film does not have the racy screenplay or scary elements which is expected of a horror film. Except for the interesting flashback, this film has nothing much to watch out for and can be watched when it comes on TV.