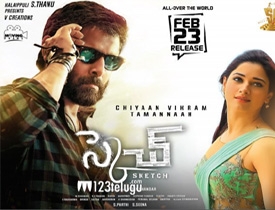 Chiyaan Vikram’s much-anticipated action thriller, Sketch has hit the big screens today. The movie has Vikram and Tamannah in the lead roles. Let’s see what this movie offers us.

Sketch(Vikram) makes a living by recovering vehicles of those who don’t pay their dues. He gets involved in a gang war with another group who develops hatred towards him. One fine day, he meets Ammu(Tamannah) in the process of recovering a bike and falls in love with her. Eventually, he gets into neck deep trouble for stealing the main antagonist’s car with whom he has problems. How he comes out of all these problems forms the rest of the story.

Vikram looks apt for the role and comes up with a natural performance. His shaggy look and ease of acting help in bringing depth to the character. Vikram does really well as a person with a carefree attitude and arrogance.

Tamannah has limited screen presence but emotes well. She is seen in a traditional attire through the movie and impresses with her mature performance. The star heroine looks really beautiful in the romantic songs. The movie is pacy and offers decent entertainment in some parts of the first half.

The plot of the story is quite predictable and offers nothing new to the audience. The interval episode looks prolonged and lack of intensity plays the spoiler part here. With the presence of too many action episodes, one may lose interest in the movie. The way Sketch deals with the main antagonist during the climax look a bit comical and silly.

The movie takes weird turns in the second half as the proceedings look rushed and unconvincing. A few unwanted scenes here and there take a toll on the pace of the movie. The climax is a complete let down as the director builds up good intensity towards the end but ends the film with just a simple action episode.

The camera department did a decent job of keeping things simple. A few fights have been captured well and the visuals look good. Music plays a key role as the music director did a commendable job with his uplifting BGM. The production values are decent and bring an authentic vibe to the proceedings.

The editing should’ve been crisp as there are many unwanted episodes in the second half. A few patchy and unwanted scenes tamper with the actual story line and stretch the movie for no reason. Director Vijay Chandra tries offering a social message but fails to justify any such thing in the entire movie. The way he narrates things in the climax is completely unappealing.

On the whole, Sketch is a routine suspense drama which does not offer anything that was promised in the trailers. It is an out and out mass film that may appeal only to a certain B and C center audience. The unconvincing climax and out of the blue social message deviate the film’s mood completely. Apart from Vikram and Tamannah’s screen presence, this film has nothing much going its way and can be watched when it is aired on TV.