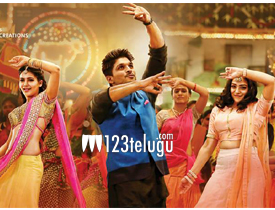 The magical combination of Allu Arjun and Trivikram Srinivas is back again with S/O Satyamurthy. This family entertainer has hit the screens today. Let’s now see how it is.

Story:-
​​
Allu Arjun (Viraj Anand) is the son of ​Europe’s ​rich​est​ business tycoon Satyamurthy(Prakash Raj). One fine day, Satyamurt​h​y ​​dies in a car accident​​ and Viraj is held responsible for ​all his father’s debts. Things take an ugly turn as Viraj heads back to India with his entire family.

​On his return to India, Viraj ​joins an event management company as a wedding planner. There, he is assigned the job of managing a high profile wedding. During the course of the wedding, he falls in love with Sameera(Samantha).

Twist in the tale arises when Sameera’s dad(Rajendra Prasad) throws an open challenge to Viraj in order to marry his daughter. Rest of the story is about how Viraj manages to accomplish his challenge and where do Nithya Menen, Upendra, Sneha and Adah Sharma fit into all this.

Major plus point of the film is the heavy duty star cast. It is a feast for film lovers to see so many stars at one place. Allu Arjun is the highlight of the film and is superb in an emotional role. He gives a settled performance and is especially good with his dances.

​Kannada star Upendra, is a perfect fit in his role and brings a lot of depth along with Sneha. Ali and Brahmanandam are hilarious in their roles and bring comic relief to the film.​ Second half of the film is entertaining and also gets emotional during the climax.

Samantha looks ​decent and does well in all her comedy scenes with Allu Arjun. Adah Sharma is apt in her role and justifies her character. Production values are superb as the makers have not compromised on the look of the film.

Story of the film is routine and has been dealt many a times before. Length of the film is a tad too long as many scenes could have been easily edited. After a certain point of time, the film gets slightly predictable. Nithya Menen’s role lacks proper justification, and it is quite surprising to see an actress of her caliber accept such a small role.

First ​half is quite simple as the entertainment quotient is ​slightly less during this time. The movie starts on an emotional note and moves forward with nothing much interesting happening during the first half.

Devi Sri Prasad’s music is one of the biggest assets of this film. All the songs are superb and have been shot extremely well. But it is his background score which elevates the film to a decent level. Dialogues in any Trivikram film are top notch and S/O Satyamurthy is no exception. Certain dialogues which define human values have been written with a lot of depth.

Editing is decent but some lengthy scenes could have been edited further to make the film crisp. Coming to director Trivikram, he has done a ​decent job in executing a routine story. The way he has managed the entire star cast and extracted performances from them is good. The ​only drawback in his direction is that he becomes slightly preachy at times.

Verdict:-
​​
On the whole, S/O Satyamurthy is a ​decent family entertainer. Allu Arjun’s rocking performance​ and a huge galaxy of stars​ are​ the major assets of the film. If you ignore the routine story​​ and go in without much expectations, you can ​easily give this film a shot with your entire family​.