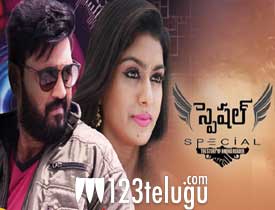 Continuing the trend of low budget films, yet another movie which has hit the screens today is Special. Starring Ajay in a lead role, let’s see whether this film manages to impress us or not.

Ranga(Ranga) is a mind reader who tells what is in the minds of the people by just touching them. Over the years, because of certain people, he becomes a psycho and his only motto is to kill the people who made him like this. Seeing this crazy situation, the police department appoints a special officer(Ajay). Rest of the story is as to this special officer nabs Ranga and puts him behind the bars.

The basic point of mind reading looks interesting. Ranga who played the mind reader was impressive in his role and gave a realistic performance. His actions during the scene where he finds out the actual truth about the heroine were very good.

Akshita, the heroine was also okay in her character and gave ample support. Ajay, who did the role of a cop was the best of the lot. Though he did not get much to do in the film, his screen presence was amazing. All the scenes between him and Ranga were decently executed.

Though the concept is okay, the manner in which the director narrated the film was very disappointing. Though the scenes look good individually, as a whole, there is absolutely no flow in the proceedings.

None of the thrills creates any interest for the audience as they have not been unleashed in a proper manner. After starting the film on a good note, the proceedings go for a toss as the director adds unnecessary thrills to engage the audience. There was a good scope to add drama in the film but the director missed it completely.

Background score by Manyam is good in a few areas. Production values of the film are just about okay and so was the camera work. Dialogues were and so was the art design in the film. Editing was pathetic as many scenes could have been chopped off. Director Vasanth lost a good opportunity of narrating a film with a good concept as he took the film down with his inexperience.

On the whole, Special is a silly revenge drama which does not have anything going it’s way. Though the concept looks naive, the narration was horrible and irritates the audience in many areas. Except for lead actor, Ranga’s sincere attempt, this film offers nothing new and can be easily ignored this weekend.