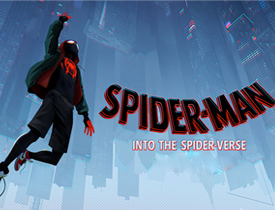 The latest outing from the Spider-Man franchise, Spider-Man: Into the Spider-Verse has hit the theaters in India today. The Spider-Man universe lost its co-creator, Stan Lee, recently and that makes this film a special one for the followers of the franchise. Let’s check whether this animation flick lives up to the expectations laid upon it or not.

Miles Morales, a normal Brooklyn teenager gets bitten by a radioactive spider and as a result, he develops special powers. After a string of unexpected events, Peter Parker gets killed and Miles becomes the only Spider-Man in this universe.

Well, this is exactly when ‘Spider persons’ from various dimensions get teleported to this universe. Later, they come to know that an evil force, Kingpin, is behind all this and realize that his greed can put thousands of lives at risk. What is the backstory behind these happenings? Why are the ‘Spider persons’ teleported to this universe? Can they win this war against evil and get back to their respective dimensions? The answers to these questions form the remaining story.

Firstly, the concept and setup for this outing from the Spider-Man franchise are completely different when compared to that of the other ones. The concept of a parallel universe has been explained in a detailed manner and does not leave any doubts in the minds of the viewers towards the end of the movie.

Character establishment is the key for this movie and the director got is spot on in this department. The existence of multiple spider persons does not seem overboard, thanks to the character weight.

The second half has good doses of feel-good moments, heartbreak, comedy, and action, which is more than enough to keep the viewers glued to the screen.

The film takes its own sweet time to get into the core plot. The first twenty minutes or so are not-so-engaging with nothing much happening around. But the proceedings pick up the pace towards the interval.

The real reason why there is a convergence in the dimensions is revealed only after the interval and one may feel that the suspense had been held for a bit too long.

The directors, Peter Ramsey, Robert Persichetti, and Rodney Rothman have perfectly adapted to the complex story and theme this movie boasts of. They made sure that the second half has enough moments to evoke cheers from the general audience.

Background score is impressive and carries the cartoonish vibe. Editing is crisp for most parts but proper care should have been taken towards the initial episodes.

On the whole, Spider-Man: Into the Spider-Verse has an intriguing premise and the writers made sure that they extract the most out of it. The narrative is sleek, the storyline is crisp, and the concept is believable, making this film a wholesome entertainer for all. Barring a few glitches in the first half, Spider-Man: Into the Spider-Verse, keeps you engaged all the way through. Highly Recommended.